South American heavyweights Brazil will play Lionel Messi’s Argentina in the final of the 2021 Copa America.

Both sides have had a similar run in the tournament, making them evenly matched for this fixture. Plus, it is also a battle between two of the most formidable players in the football world – Lionel Messi vs Neymar.

Brazil, as the hosts here, do have obvious home advantage but seeing that this final is to be played behind closed doors, that does not really matter at the moment.

Meanwhile, Messi is looking to take back home a major silverware since joining the national side – a feat that has seemed elusive for the little maestro.

In all fairness, Argentina makes for an appealing bet solely owing to the Messi factor – it is in this match that I predict the visitors to finally win a trophy this century.

Back Argentina to Win the Trophy
2.35
Casumo

Starting as the defending champions, Brazil entered the tournament as the heavy favourites and have certainly excelled at living up to the expectations.

They won their Group B with 10 points from four matches – a 3-0 win over Venezuela, 4-0 win over Peru, 2-1 win against Colombia, and a 1-1 draw with Ecuador. In the knockouts, they beat Chile and Peru 1-0 to reach the final for the 21st time in Copa America history.

With this run in the tournament, Brazil have extended their unbeaten streak to 13 matches with their last defeat coming back in November 2019 – coincidentally at the hands of Argentina by 1-0.

The Selecao have been boosted by the goal-scoring form of Neymar and Lucas Paqueta (two goals each), followed by the likes of Casemiro, Roberto Firmino, and others. There is an incredible depth in this Brazil line-up as they have unarguably looked like the best team in the competition.

Having won the Copa America in 2019 at the iconic Maracana, Brazil will be confident of their chances of repeating the feat again.

Argentina are chasing their first title since the turn of the century. Having come close to it no less than five times (four Copa America and one World Cup), the pressure will be high on the boys to finally break that jinx.

The visitors started slowly in the tournament but have grown into it with time. They topped Group A with 10 points as well although, their first few results were slightly underwhelming.

La Albiceleste started with a 1-1 draw against Chile and followed it with a couple of 1-o wins over Uruguay and Paraguay. They ended the group stage with a 4-1 rout of Bolivia.

In the first knockout, they beat Ecuador convincingly by 3-0 while in the semis, they faced some resistance from Colombia. Lautaro Martinez’s opening goal was cancelled by Colombia’s Luis Diaz. At 1-1, the match headed to extra time and penalties. Emiliano Martinez’s goalkeeping heroics allowed Argentina to progress to the final with 3-2 on penalties.

Messi and Lautaro have seven goals between them with the former in contention to win the Golden Boot with four goals. The 34-year-old has been a key driving force in Argentina’s Copa America campaign and will most definitely play a part in the final too.

In this part of the world (and anywhere else), the rivalry between Brazil and Argentina is incredibly known and goes back decades.

In the 111 times the two teams have met, Brazil come out on the top with 46 wins to Argentina’s 40 while settling for a draw in the other 25.

The last meeting between the two South American nations took place in November 2019 in an international friendly where Messi scored the sole goal to win the match. 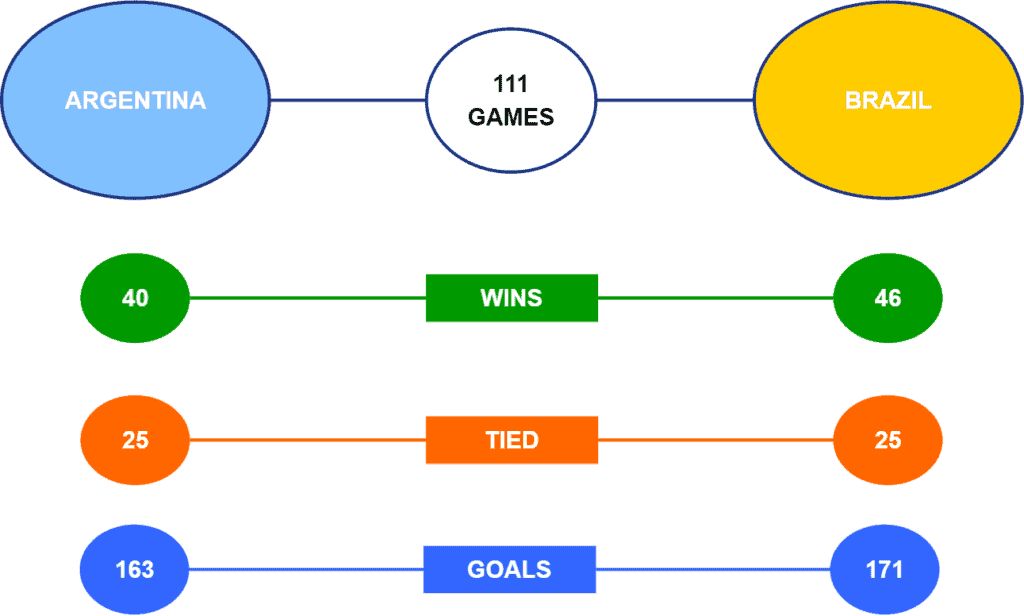 Recommended Bet: Back Argentina to win the cup @ 2.35 with Casumo

Yes, Brazil may seem like the obvious favourites here but as we all know, previous statistics and form do not hold much credence in the finals, especially when it is a battle between two giants.

Argentina have endured an incredibly long wait – spanning over more than 25 years – to lift a major trophy. With the heartbreak from the 2014 World Cup final and other subsequent Copa America finals still fresh in their memory, the team will be determined to finally put those demons to bed.

Lionel Messi has been in a sensational form this season in Copa America – and we do not need any introduction to what happens when he is in a mood like this. Plus, he has all the support he needs from his fellow teammates to thrive and put on yet another masterclass.

That said, like for like, Brazil does have better player quality than Argentina’s and those looking for a safe bet may back the five-time world champions.

Lionel Messi to be Anytime Goalscorer

Recommended Bet: Messi to be anytime goalscorer @ 3.25 with Betway

Messi is on track to finish the tournament as the top goalscorer and this being a final, we can most definitely expect him to score here as well.

Plus, he has scored in his last three matches for Argentina in Copa America, so the momentum is certainly on his side to carry that form forward.

Four of the last five meetings between the two sides have seen under 2.5 goals. It is hard to imagine a similar outcome this time around, given the importance of this historic final. After all, there is plenty of attacking talent in the two sides.

While both teams have been defensively solid in the tournament so far, this is a match where we can most likely expect goals from both sides, the total count of which may exceed 2.5.