It’s the much-awaited final of the World Test Championship, pitting the two strongest sides, India and New Zealand, in Test cricket against each other. This is going to be an exciting game for fans and online cricket betting lovers alike!

It starts on Friday, June 18 at Lord’s. The first ball is set to be bowled at 3.30 pm IST and it should be a cracking game between two extremely well-matched sides. The best India vs New Zealand betting tips are up next for this World Test Champions Final!

Let’s move on to the game’s top cricket betting tips for the WTC Final between India and New Zealand.

There are a couple of betting predictions at big odds there, plus my rationale as to why it could easily end in a draw at Lord’s in today’s match.

India are highly likely to go with the usual five batsmen that they’ve been playing for the last few months in Test matches.

So that’s Gill, Sharma, Pujara, Kohli and Rahane. Rishabh Pant will play as wicket-keeper batsman and the temptation must surely be there to bat him at six rather than seven, because he’s a considerably better batsman than whoever does bat at six.

That leaves a spot for an all-rounder and it’s likely to be the steady hand of Hanuma Vihari.

We’d argue that it should be our Bet India favourite Ravi Jadeja playing as the all-rounder but with Ravi Ashwin certainly featuring, it’s highly unlikely they’ll play two spinners.

Among the bowlers, it’s two from Mohammad Siraj, Mohammad Shami and Ishant Sharma

Plenty for Kane Williamson and the selectors to think about. They fielded their best XI in the First Test and drew and then fielded a side containing plenty of changes for the Second Test and won it.

One of the few certainties regarding changes from that Second Test is that Will Young will have to make way for returning skipper Kane Williamson. It’s harsh on a man who scored 82 in the first innings but Williamson obviously has to play.

BJ Watling will surely return as wicket-keeper and bat at number six but then it’s a straight choice between Mitchell Santner and Ajaz Patel for the spinner’s spot. Patel took four wickets and is the biggest threat but Santner is a better fielder and batsman.

Save a thought for Matt Henry. He was man of the match in that win over England with seven wickets and may not even play here if the Black Caps decide to go with their tried and trusted trio of Southee, Boult and Wagner.

It’s true that Lord’s produced a draw when England and New Zealand met a couple of weeks ago.

But it’s also true that almost a full day was lost to rain and that if we’d had all those extra overs that were lost to rain, we probably would have got a result.

This isn’t a wicket where you go out and get 400 first up so anything around 350 in the first innings would be seen as competitive. There should be something for the seamers at the beginning and there should be some spin on days four and five, so all bowlers will get their chance.

There’s a fair bit of rain forecast for Friday and then a bit more for the next few days so there’s  danger we may miss almost a whole day’s play in total, once more.

These two have played each other 59 times with New Zealand winning just 12 times, India prevailing on 21 occasions and the most common result being the draw, which happened 26 times.

The draw has however been quite a rare occurrence over the past few years with just one in the last 10.  Home advantage has been crucial of late. India won all of their last three at home, only for New Zealand to win the last two when playing at home themselves.

It’s worth remembering that this one is at a neutral venue given it’s at Lord’s, in London. 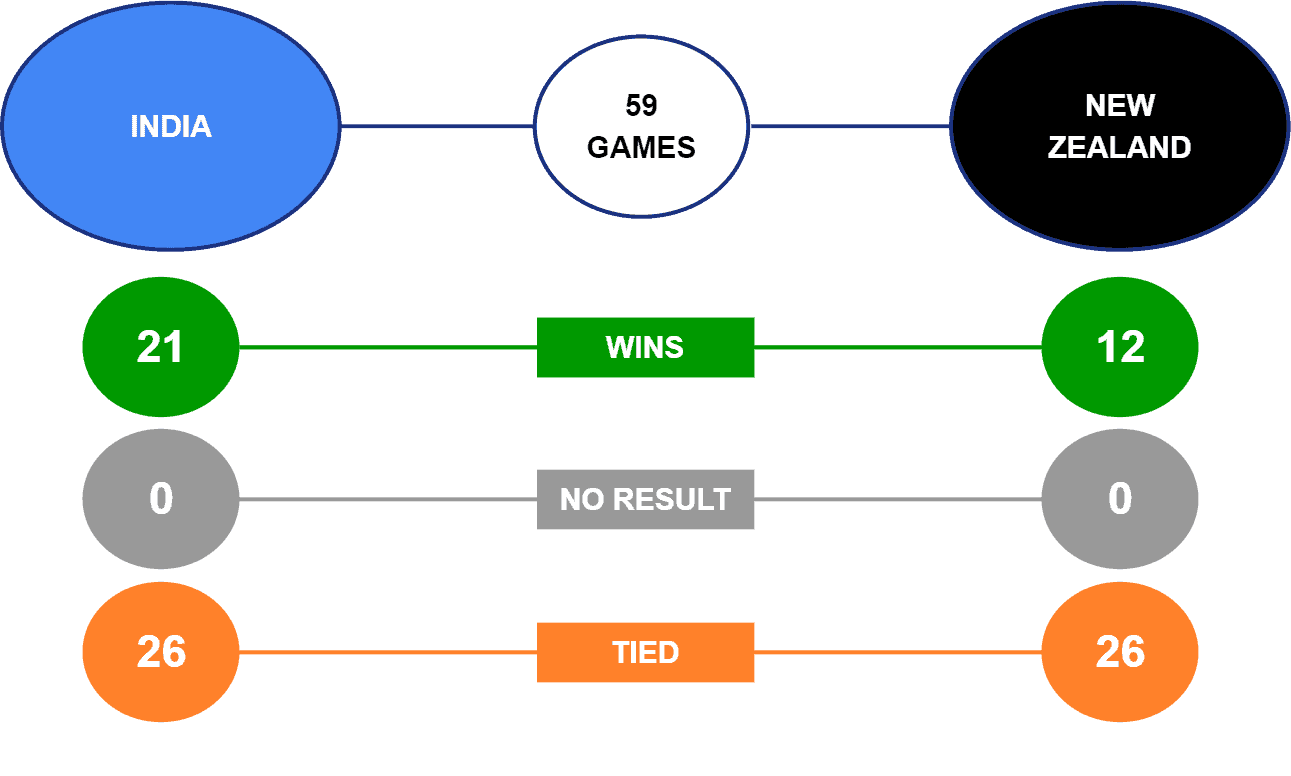 There aren’t too many golden rules when it comes to cricket betting here at Bet India but here’s one I always stick to always oppose Kohli at the toss.

This is a man who has clearly been blessed with a lot during his life including incredible cricket talent, leadership skills and a body made for top-level sport. But something’s gotta give and the flipside is that he’s awful at the flip. Side with Williamson.

Below are the New Zealand vs India toss winner statistics for all Tests these two have played against each other.

These two have drawn almost half the Tests they’ve played each other in.

We know that Lord’s also produced a draw in the last match and that there’s a fair bit of rain forecast for the first day in particular and a couple more after that.

The final important factor here is that a draw actually wouldn’t be a bad result for either side.

They’d end up sharing the first-ever World Test Championship and the trophy itself and they’d probably both be pretty happy with that. So the draw is certainly the one to go with, though a win for the Black Caps would probably be the next-best choice.

It’s always worth remembering that Ajinkya Rahane has the best overseas record of any Indian batsman, even Kohli.

And this is just the sort of match that could really bring out the best in him. The ball will surely move on the first couple of days and test batsmen’s resilience, patience and technique.

That could easily create a scenario where the likes of Boult and Henry are swinging the ball and India’s Top 4 all get out cheaply.

That in turn could create a scenario where Rahane needs to perform a rescue act and a score of 50 or 60 could be enough to win this betting heat. At the current odds, it’s definitely worth a try.

What a start Devon Conway has made to his Test career. He only made his debut in that First Test against England at Lord’s and duly scored 200 in the first innings, to make sure that England were pretty much out of the game from that point.

He then followed that up with a composed 23 in the second innings.

And he proved it was no fluke in the Second Test, scoring an excellent 80 to set up New Zealand’s win.

So here we have a player in the form of his life, fresh from scoring 200 on this very wicket. And against a bowling line-up that won’t have seen much of him yet. Go with Conway.

Let’s round things off with a couple of fun facts and little-known stats before the game gets underway.

Kane Williamson is still eyeing up his 25th Test century after not getting one in the First Test against England and not playing in the Second.
After a good performance in the Second Test, Trent Boult still has an economy rate below 3 (2.98) in his Test cricket career.
Kyle Jamieson was the star of the show the last time these two met in Christchurch, scoring 49 with the bat and taking five wickets in the first innings.
Virat Kohli, remarkably, has more Test centuries (27) than half centuries (25).