The PSL is back after its enforced break and we’re straight back into the action with an important game, filled with good cricket betting opportunities.  Islamabad plays Quetta here and the game will begin at 6.30 pm IST (5.00 local time) on Friday, June 11, with the game to be played at Abu Dhabi.

It’s almost last-chance saloon time for the Gladiators, while Islamabad can’t be making too many mistakes at this stage, either.

The best Islamabad United v Quetta Gladiators predictions are coming up next.

Time for our best cricket betting tips for the game based on our knowledge and insight.  Here’s what I make of today’s PSL game, starting with why Islamabad are very much the bet to win.

There have been a few changes since the PSL was suspended back in March. They will now be without the English trio of Alex Hales, Lewis Gregory and Phil Salt.

Hales is a huge loss as one of the world’s most explosive limited-overs openers, a player who can really take the game away from you in no time. He was, after all, the top run-scorer in this year’s Big Bash.

Gregory is a good player too as a capable all-rounder while Phil Salt has plenty of potential, although he hasn’t been at his best for the last year or so. South African top order batter Janneman Malan is also out.

In came Mohammad Akhlaq, Umar Amin, Brandon King and perhaps most intriguingly of all, former Aussie Test opener Usman Khawaja, who enjoyed a good season at the Sydney Thunder in this year’s BBL.

The Gladiators suffered an even bigger loss.  Tom Banton, Dale Steyn, Anwar Ali, Chris Gayle and Ben Cutting departed the team and are not coming back.

Steyn was having a poor tournament and Tom Banton never really got going but they’ll badly miss Ali, Gayle and Cutting who come full of experience and added top-class options in key positions.

Cutting in particular is a proper all-rounder who bowls accurately and economically, while being able to clear the boundary with ease on his day.

Still, it’s never a bad thing when one of the men coming in is Andre Russell. He’s joined by Jack Wildermuth, Jake Weatherald, Khurram Shehzad and Zahir Khan as players joining the Gladiators after the break.

A reminder that this is traditionally the toughest of the three grounds in the UAE to score at.  The ball can often grip in the surface, there can be some uneven bounce and unlike Sharjah and Dubai, it doesn’t really have the short boundaries for batsmen to target.

You’d think that the side batting first would probably be pretty pleased if they can get to 160.  Unsurprisingly given this is in the desert…no rain is forecast!

Between 2019 and 2020 the Gladiators won four in a row but Islamabad won the last one, back in March, as part of this year’s edition of the PSL.

Quetta posted just 1567, which was chased with considerable ease by Islamabad with three overs to spare. Pakistan international Faheem Ashraf was man-of-the-match after claiming three wickets for just 11 runs. 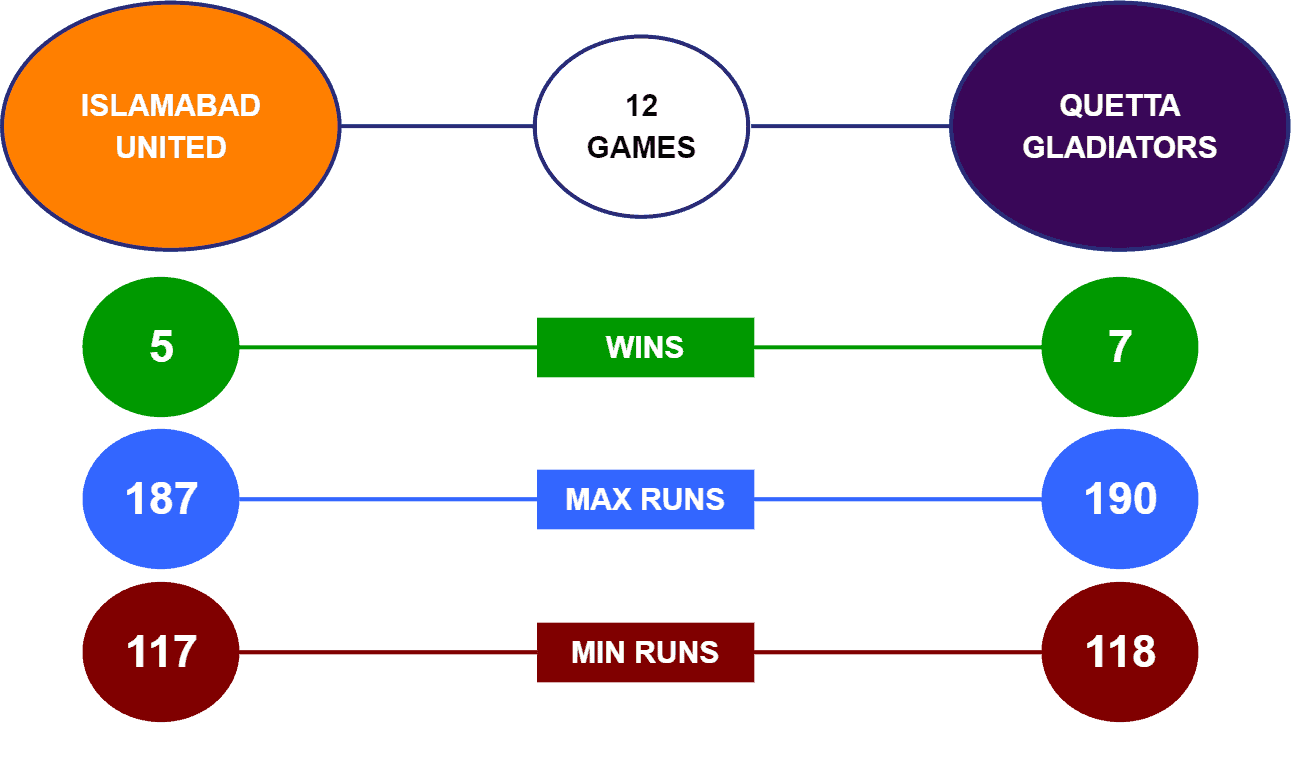 Time for some Islamabad v Quetta statistics regarding the toss. Gladiators have had the better of it over the years, although United did win it when they played back in March.

But (if there is such a thing when it comes to the toss) it’s been the Gladiators who have had the upper hand in the long run, so they’re who we’re going with.

Recommended Bet: Back Islamabad United to win @ 1.6 with 10 CRIC

The Gladiators are 8-5 up in the games they’ve played against each other so you’d think they’d be in pole position here. But no.

The Gladiators were the poorest side by some distance before the PSL’s interruption with skipper Sarfaraz Ahmed making really poor decisions as skipper and showing even worse body language.

You could also argue that despite Quetta getting Andre Russell in, it’s Islamabad who look stronger after the personnel changes with the players exiting the Gladiators more important to the side than those that United lost.

Here are some interesting facts for you ahead of the game.