The match will be played at the Sheikh Zayed Cricket Stadium, Abu Dhabi, on Thursday, June 10, starting at 6:30 pm IST (5:00 pm local time).

Karachi Kings are sitting happily at the top of the table with 6 points from three wins and two defeats so far. However, they only lead because of a superior net run rate, seeing that three other sides share the same number of points.

Multan Sultans, on the other hand, have managed just one win in their five matches. They were struggling before the league was paused and with the departure of their international talent, their problems have only increased.

I’m backing a win for Karachi Kings owing to their overall form and a slightly superior squad.

Karachi Kings won their three league games this season on the back of some superb batting performances by Babar Azam and Sharjeel Khan. The two players have scored 258 runs and 200 runs respectively in their five innings.

This kind of firepower was the reason why they won the title last year – and look primed to repeat that feat again. That said, the lack of depth in their bowling department may be a bit of a problem for them.

This also explains why have won all their games batting second –  despite posting big totals batting first (186 against Lahore Qalandars and 196 against Islamabad United), they simply have been unable to defend well in the PSL 2021.

However, they did get international replacements in the likes of Martin Guptill and Thisara Perera for the remainder of the tournament. These marquee additions may just prove to be the thing that takes them all the way through to the trophy.

Multan Sultans have lost their last two games in a row and if things don’t change soon, they may very not make it to the playoffs.

So far this season, they have never won batting first and their only win so far came when they batted second against Lahore Qalandars, thanks to the heroics of Mohammad Rizwan.

Speaking of Rizwan, the 29-year-old is the rising star in Pakistan cricket at the moment. Over the last couple of months, he has been involved in international cricket for the country against Zimbabwe and South Africa where he had a good run with the bat (4 half-centuries in 8 T20s).

Obviously, he alone can’t fill the void left by the unavailability of Chris Lynn and James Vince; however, the Sultans did sign Shimron Hetmyer as an international replacement. Plus, they do have some talented bowlers in Sohail Tanvir, Usman Qadir, and Imran Tahir.

The game will be played at the Sheikh Zayed Stadium in Abu Dhabi – the same venue for the rest of the tournament.

Both teams will watch how the game between Islamabad United and Lahore Qalandars goes to get a feel of the pitch and form their strategies.

The two teams have met 8 times but two of those were abandoned with no play. Karachi Kings dominate the Sultans with a strong 5-1 lead, including beating them earlier this season by 7 wickets (Azam scored a brilliant 90, not out). 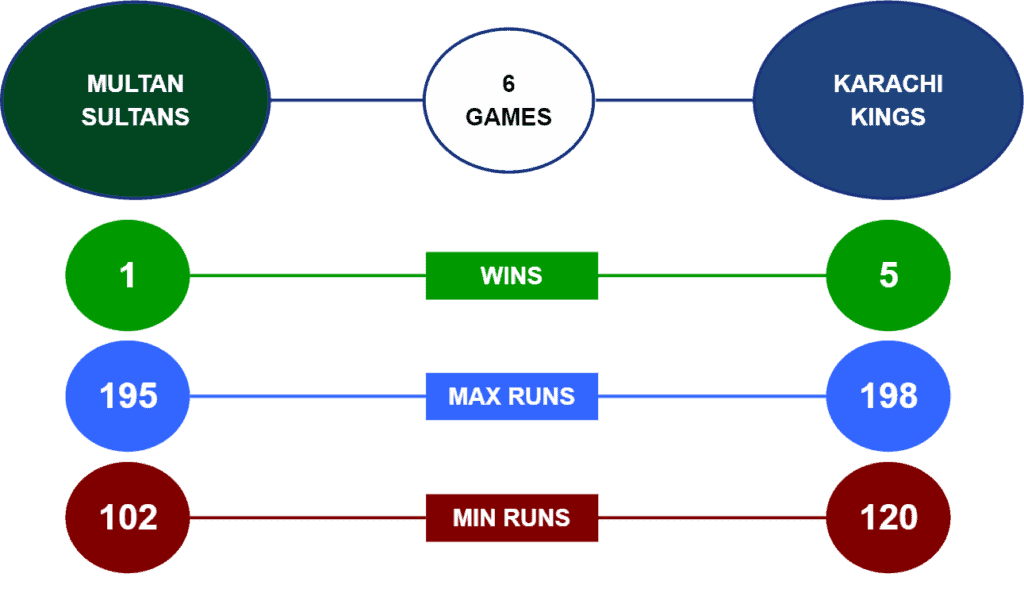 Karachi Kings dominate in the toss department too. Let’s back them to win it this time around too.

Recommended Bet: Back Kings to win @ 1.68 with Pure Win

No matter how we look at this fixture, Karachi Kings will start as the heavy odds-on favourite. They have a strong batting line-up and a fairly decent overall squad.

As for the Multan Sultans, they will be under pressure to perform and find wins quickly to stay in the tournament. It will be difficult, given their head-to-head record against the Kings.

Plus, when the two teams met in the first leg back in February, Chris Lynn and James Vince played important innings to guide them to a respectable total. Neither of them are available now.