It’s the 1st ODI between England and Pakistan and it’s taking place at Sophia Gardens, Cardiff. I’m about to give you all the latest team news, key stats, pitch report and the best England vs Pakistan online cricket betting odds and tips for our loyal Indian readers!

The game takes place on Thursday, July 8 with a start time of 5.30 pm IST.

After the best cricket betting tips ahead of the game? Course you are. I’m about to give them to you, including a thorough explanation of why Pakistan are the selection in the England v Pakistan betting tips, on the match winner market. 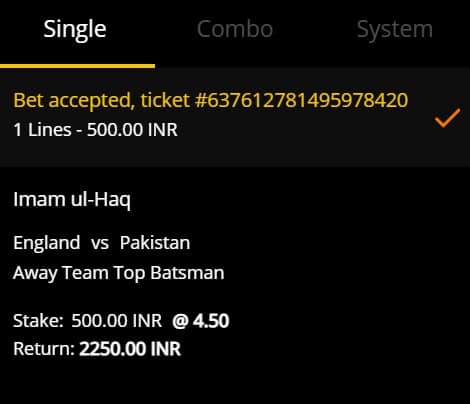 As I explained here, England have had to completely change their squad after seven cases of positive tests for Covid-19 within the camp.

At least it means Ben Stokes is involved after having not played for England at all this summer and in addition to being their most senior batsman and most important all-rounder, he’ll captain the team, as well.

Dawid Malan is also somewhat fortunate to be involved in the Series. He had left the squad for personal reasons so avoided the Covid-19 issues, hence why he’s available to play.

He’s mostly known as a T20 specialist but his experience will be vital here and he’ll probably open the batting, unless the similarly experienced James Vince opens and Malan bats at three.

The batting looks ok with some old heads on board but the bowling doesn’t look so clever.

It will be made up of players who haven’t had much success at this level before or guys who haven’t played many ODI at at all. Stokes may have his hands full here.

Pakistan have found playing ODIs against England in England hard work for the most part.

If they were up against a full-strength Lions team, you’d think they’d be happy to win just one of the matches. But given who they are up against (a depleted team), they’ll be wanting to win the Series, never mind just the one match.

They appear to have all the bases covered.

In Fakhar Zaman, Imam Ul Haq and Babar Azam they have a really strong top three with Mohammad Rizwan a fine keeper-batsman as well, though his best performances have admittedly been in T20 cricket.

Then there’s the bowlers: Hasan Ali, Shaheen Shah Afridi and Muhammad Husnain are all fine quick bowlers, while Shadab Khan is a top class spinner who can also make contributions with the bat.

The middle-order doesn’t look particularly strong but then again it might not need to be if between them, that Top 3 scores plenty of runs, as I’d expect them to.

The England v Pakistan betting odds have them as favourites and with good reason.

Pakistan like it here in Cardiff. They’ve played four completed matches at Sophia Gardens in and won three of them (twice against England and once against Sri Lanka).

They lost to Australia way back in 2001. There was also a game there against England in 2006 that was rained off. So that doesn’t count.

But what does count are the two wins over England in the past five years. In 2016 they chased 300+ and won by four wickets and better still, in the 2017 Champions Trophy semi-final, they beat them with even more ease, chasing 212 with minimum fuss.

There’s a theory that the slower, turning wicket at Cardiff will play into Pakistan’s hands, not England’s.

There could be some truth to that but bar those two losses against Pakistan, the only other side to have beaten them over the past nine matches was India. Meaning England’s overall record here stands at eight wins out of 11 completed matches, which is pretty decent.

There’s rain forecast for the day before and the day after the game but Thursday should see fair weather. So let’s hope to get a completed match, though DLS may play some part.

Time to look at the England v Pakistan head-to-head record now. I was pretty surprised that England are actually 53-32 up against Pakistan over the years in ODIs.

England were pretty poor in this format in the 90s when Pakistan were excellent and kept beating them. But the overall numbers don’t lie.

Unsurprisingly, England are even more dominant when at home. They’ve won 30 out of 46 completed ODIs against Pakistan on English soil but as you know, this is far from a full-strength England team.

So what do the England v Pakistan toss winner statistics say? Well, Eoin Morgan is generally pretty lucky at the toss. An example of that is he won the toss all three times in the recent ODI Series against Sri Lanka.

Morgan also won the toss the last time they played against this team, an excellent win for Pakistan at the 2019 World Cup in Nottingham where Mohammad Hafeez hit a brilliant  84 off 62 balls.

So Morgan and England are the ones to go with.

Recommended Bet: Back Pakistan to win @ 1.8 with Betway

Time for our betting prediction on the match winner market. It’s Pakistan.

They tick just about every box that you’d want from a good ODI side with that quality Top 3, a fine spinner, a couple of good all-rounders and top-class pace bowling options.

Essentially, they’re playing an England B team where only Stokes would make it into the A team and England may find that a step too far given most of these players are decent county players who haven’t played much at international level…for a reason, if I’m honest.

Add to the equation the fact that Pakistan have such a good record here in Cardiff and you can easily see why I fancy the men in green in our win prediction.

The England v Pakistan win probability says Pakistan have a 55.6% chance of winning and I feel like that’s actually quite generous.

By the way, here’s a good Betway review for you to read as a reminder of why I believe they’re a top-class betting site.

Recommended Bet: Back Imam Ul-Haq to be Pakistan top batsman @ 4.5 with 10CRIC

Imam Ul-Haq doesn’t look much like a run machine with his spectacles and slightly awkward running style when dashing between the wickets. But he is.

He’s become one of the most consistent ODI batsmen in the world over the past few years and averages 51 from 43 ODIs, which is brilliant.

That includes nine fifties and seven 100s and his strike rate is healthy enough at 80, though it will probably be a bit higher by the time he retires.

Crucially, he has a strong record in England after facing England here several times and also playing a Champions Trophy here, as well as a World Cup.

He averages 52 here and has scored two centuries in 12 games on English shores.

Skipper Babar Azam rates a big threat but I like Ul Haq at 4.5.

Recommended Bet: Back Ben Stokes to be England Top batsman @ 4.5 with 10CRIC

There are some decent batsmen on show for England, which is more than I can say about their bowling

That man Vince is a fine player while Malan will see this as a good chance to try and secure a place in the side for the long-term. You could say the same about Dan Lawrence.

But Stokes is surely a cut above the rest in every regard. There’s always a slight fear that if he bats at five he may not get enough overs to build a good score. But there are three flaws in that argument.

The first is I think he’ll bat at four, the second is that England could well lose early wickets so he might be at the crease early. And the third is we know how quickly he can score on his day so even if he only bats after say 20 overs, he’ll still have enough balls to get to 70 or so.

It’s an obvious choice but the right one.

Time to round things off with some cool stats. Here they are.

Imam Ul-Haq needs just 34 runs to get to 2000 ODI runs in just 43 innings, which is excellent.
Babar Azam has hit just 37 sixes in 80 ODIs.
Ben Stokes will be playing his 99th ODI here at the age of 30.
James Vince only has one ODI fifty in 16 games.
This will be Ben Duckett’s first ODI in five years.