Peshawar Zalmi will look to end their Pakistan Super League group stage campaign on a winning note when they take on the league leaders Islamabad United on Thursday, June 17, starting at 6:30 pm IST (5:00 pm local time).

The match will be played at the Sheikh Zayed Cricket Stadium, Abu Dhabi.

Islamabad United, with two games in hand, lead the PSL table with 12 points. The Zalmi are at a close second with 10 points although, with only one game remaining in their group stage.

Both sides look comfortable enough to reach the playoffs but with Lahore Qalandars, Multan Sultans, and Karachi Kings lurking around the corner, anything can happen.

For this game, we are backing a win for United, owing to their slightly superior overall form.

In the UAE leg of the Pakistan Super League 2021, Islamabad United have been nothing but brilliant with three wins in their last four.

The boys are on a three-match winning streak, dispatching the likes of Quetta Gladiators, Karachi Kings, and the Qalandars. As the two-time PSL champions, they have certainly got what it takes to deliver big wins and perform under pressure.

What’s working for them at the moment is the depth of their batting line-up. Colin Munro scored back to back half-centuries against the Gladiators and Kings (90 off 36 and 88 off 56, not out).

In addition to him, Iftikhar Ahmed, Usman Khawaja, and Asif Ali have also done a fantastic job of stepping up with the bat when others faltered, with Ali scoring a handsome 75 off 43 to clinch the crucial win against the Qalandars.

As for their bowling, it ain’t that bad either with Muhammad Musa, Mohammad Wasim and Fawad Ahmed leading the charge.

Peshawar Zalmi have not been disappointing in the UAE leg of the PSL either. With two wins in two games in Abu Dhabi, they are still locked on to a top-four finish.

Wahab Riaz has been instrumental in leading the charge as the star bowler and the captain of the team. He is the leading wicket-taker in the league at the moment with 14 wickets from 8 matches.

While their bowling is sorted to some extent, the Zalmi can certainly benefit from some stability in their batting. Even though they are fielding some big guns like David Miller, Haider Ali, Kamran Akmal, and Rovaman Powell, they haven’t been that consistent with the bat.

Yes, these players have had a few remarkable, standalone innings in the UAE but what is needed from them is to carry this form in their subsequent games.

That said, Peshawar Zalmi have got a talent-rich squad to pick their playing XI from.

Peshawar Zalmi have been on both sides of this spectrum while Islamabad United have relied on their batting prowess to get the job done.

Batting first or batting second should not make a difference as both teams have tasted wins and losses either way. However, any score upwards of 160 runs would definitely be competitive on this pitch.

It’s been quite even between the two teams with Zalmi leading marginally by 7-6 (one game was abandoned).

What’s interesting is they have won four of their last five encounters against Islamabad United, including the first-leg fixture in Karachi this season by 6 wickets. 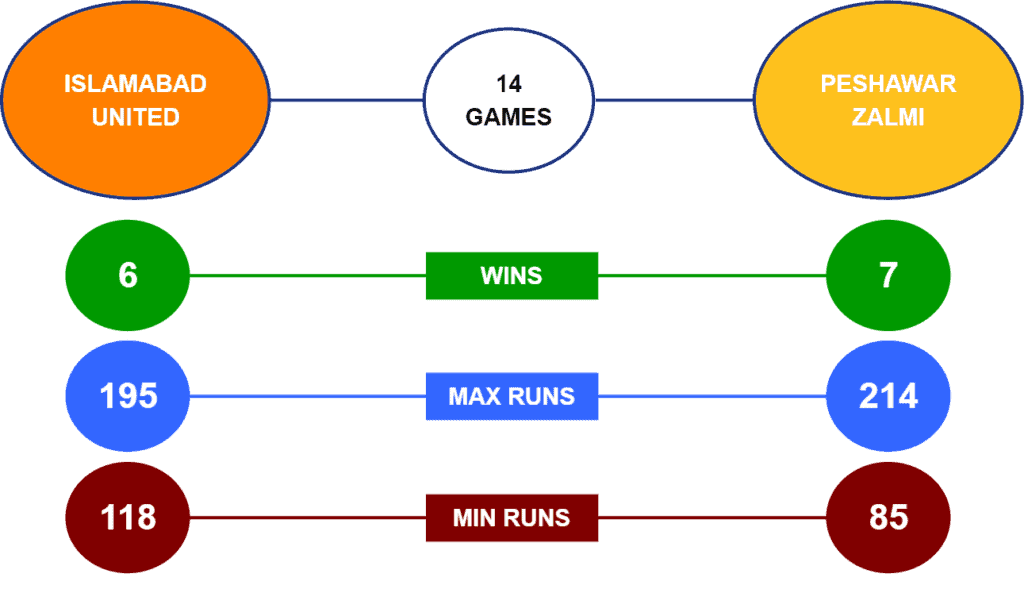 Zalmi are ahead in the toss department too, having won the toss 10 out of 14 times.

Peshawar Zalmi may have enjoyed the better part of this fixture against Islamabad United through the last couple of seasons but for this game, their chances of continuing that run are just about the same as United’s.

Comparing the two teams, it is Shadab Khan’s United that are looking much better and more consistent than the Zalmi side. They have a formidable batting line-up and a few decent bowlers who can get the job done.

Meanwhile, the Zalmi have not been that steady either with the ball or bat. But that is not to say that they cannot win – they have the players who can drive the game home but if any of them fail to deliver, things will get difficult for them.