Islamabad United will face a possibly-tired Multan Sultans in their final group stage match of the Pakistan Super League.

Islamabad United have comfortably qualified for the playoffs with a game to spare. They are all set to end this year’s PSL group stage with a top-place finish.

Multan Sultans, on the other hand, have been just as brilliant with three wins in their three Abu Dhabi games so far. However, a fourth-place position means they have to compete with Karachi Kings and Lahore Qalandars to cement their seat in the playoffs.

For this game, we are backing a win for Islamabad United owing to their superior overall form and recent winning run.

Two-time Pakistan Super League champions Islamabad United have been absolutely brilliant in the Abu Dhabi leg of the tournament.

They have won four of their last five matches in a row – two batting first and the remaining two batting second. This strongly implies that they are more than comfortable playing in either position.

Their batting has been a huge plus for them ever since the addition of Usman Khawaja. Most recently, the Australian scored a remarkable 105 not out against Peshawar Zalmi in that 400-run affair. Islamabad United batted first and scored 247-2; the Zalmi responded by reaching 232-6.

The likes of Colin Munro, Asif Ali, Brandon King, Iftikhar Ahmed, and others have also been just as brilliant, each having played a few standalone innings themselves.

All in all, Islamabad’s batting line-up is in excellent form, sailing on momentum and confidence. This gives them a huge edge in this format of the game.

Multan Sultans, looking to win their first Pakistan Super League title, have not lost a match yet in the Abu Dhabi leg. However, compared to other teams, their schedule hasn’t been that exhausting until now, giving them plenty of time to rest between the matches.

But that is about to change now – the Sultans face Lahore Qalandars on Friday and post 24 hours, they will play Islamabad United.

With two games to go, a win over the Qalandars puts them in the driving seat of making it to the playoffs, but that is going to be a bit tricky. That said, Multan Sultans have plenty of talented players on their roster, giving them ample room to rotate.

From the team’s leading run-getter this season Mohammad Rizwan to international stars like Rilee Rossouw, Shimron Hetmyer, and Johnson Charles, there are quite a few players who can guide the team home.

Plus, the Sultans have also got a strong bowling line-up with this season’s leading wicket-taker Shahnawaz Dhani playing alongside Imran Tahir, Imran Khan, and Sohail Tanvir.

Islamabad United are comfortable in either position (and so are the Sultans). But the ideal choice here would be to bat second.

Things have been quite even between the two teams through the years with Islamabad getting the better of Sultans the last few times.

They last met in the first leg of this fixture in Karachi back in February – Islamabad won that match by 3 wickets. 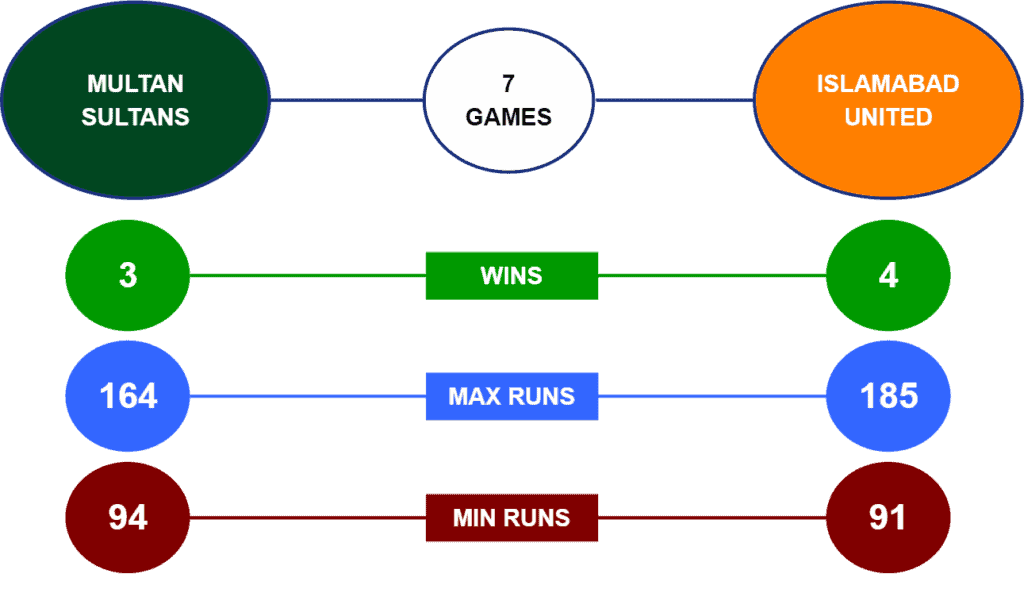 Things have been quite even in the toss department too although, Multan Sultans lead marginally by 4-3 here.

Islamabad United are already through to the playoffs and their team is also well-rested, ahead of this final group match. The Sultans, on the other hand, are coming in this game off a tight schedule.

Both teams are definitely talented and can certainly outdo each other. But for this game, we’re inclined to back the United for two simple reasons: they have won the title twice and their overall player form and general momentum are a lot better than Sultans’.