I’m about to give you the lowdown on the England v Sri Lanka betting tips for the 1st T20I. You’ll find the usual team news, stats and analysis ahead of the game on Wednesday, June 23, start time 11:00 pm IST, played at Sophia Gardens in Cardiff.

After some free cricket betting tips for Sri Lanka’s tour of England? You got it.

I’m about to tell you the best of today’s T20I England v Sri Lanka T20I betting odds and predictions. I’ve also included a trick on how to bet on England to win but at bigger odds than what they’re currently available at!

This is a strong-looking squad that England have here and they’re right in doing that.

The T20 World Cup isn’t that far away and now is the time to start understanding who their best XI is, rather than constantly chopping and changing.

As we know, Joe Root is no longer involved in the T20 set-up for England but Ben Stokes also misses out, England somewhat strangely preferring him to play in the T20 Blast than here.

There are returns for all-rounders Moeen Ali and Chris Woakes. The latter is an intriguing pick because he hasn’t played a T20I for England since 2015. But he was playing well for RCB before the IPL was suspended and adds great balance to the side.

Jonny Bairstow is a doubt to play after he picked up an injury and it would be fooling for England to risk him with such a busy upcoming schedule. Especially when in Jason Roy, Dawid Malan, Jos Buttler and Moeen Ali, they have plenty of options for those top three spots.

Eoin Morgan is in charge as ever with another notable inclusion being David Willey, another all-rounder, and another player who has been out of the side for a long time.

This is not a vintage Sri Lanka side. You go through the squad and find three or four real top quality players but then it’s a case of experienced players who have never fully kicked on or young, raw, talented players who are yet to prove they’re as good as they can be.

The first one to look out for is Kusal Perera, skipper and opening batsman, who has some real star quality to him.

Few players can score as quickly as him on their day. But he may be forced to bat at number four because that’s where they’re weak and that limits the skipper’s potential to go big.

Other players we like are all-rounders Akila Dananjaya and Usuru Udana, an accurate seam bowler who can smash it a mile with the bat when in the mood.

But Thisara Perera retired recently from international cricket, experienced duo Angelo Mathews and Dinesh Chandimal weren’t picked which is  abit odd, given that it’s exactly that sort of experience that they’re missing.

For their sake, we hope the Sri Lankan selectors know what they’re doing.

This one will be played at Sophia Gardens, in Cardiff.

Unlike in the ongoing WTC final, weather shouldn’t threaten matters on the field with no rain forecast.

Getting to 160 here for whoever bats first should be seen as the first challenge to overcome.

But it’s not as simple as that. If that’s what Sri Lanka get, they have very little chance of defending it because England are so ruthless when it comes to chasing.

And if it’s England batting first, they’ll be thinking 190 rather than 160.

So there could be a good live betting opportunity right there: if England bat first and lose an early wicket, try to get some big odds  on them getting to 190 because the likes of Morgan, Buttler or even Sam Curran can really score extremely quickly in the death overs.

It’s somewhat remarkable that over the space of 12 years, these two have played each other just nine times in this format. It’s five wins for England, including that memorable one at the 2014 World Cup where Alex Hales scored a century to allow England to chase 190 with four balls to spare.

Sri Lanka have won four times against England so it’s all been pretty close over the years. 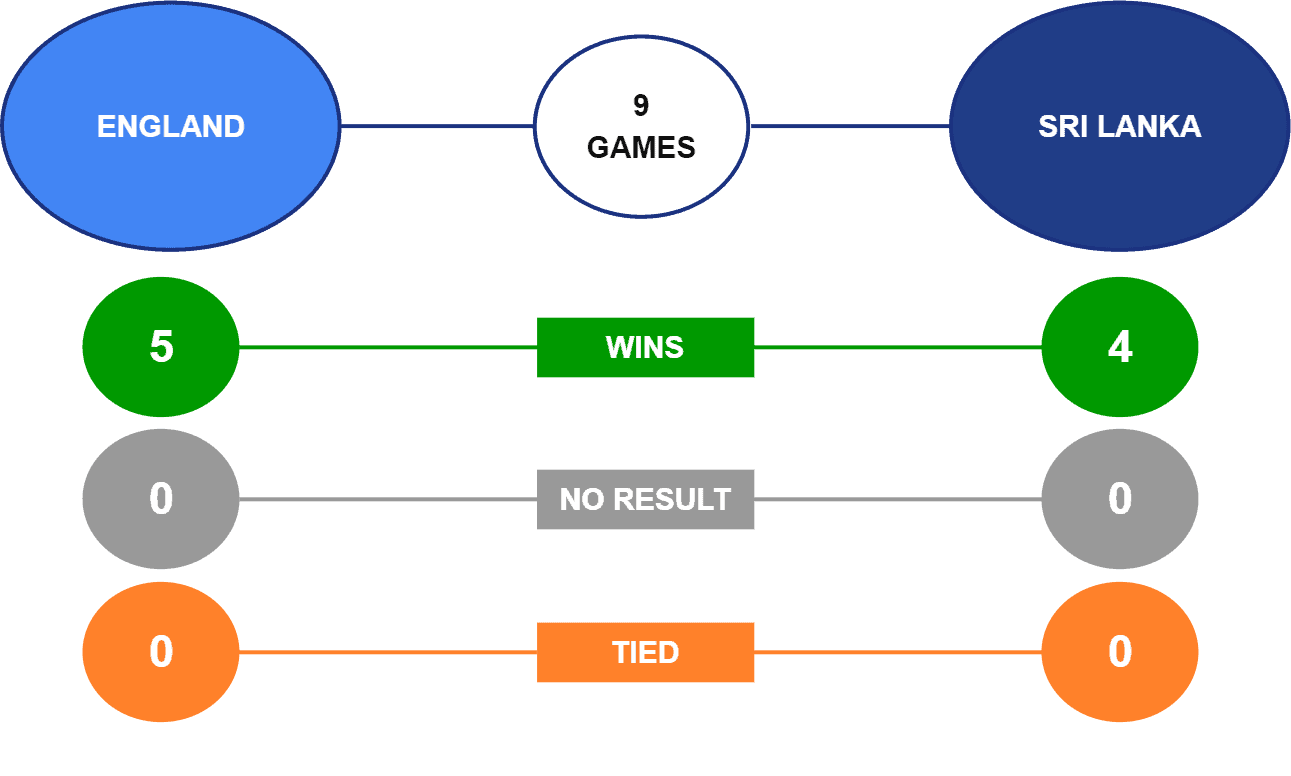 Time for some England vs Sri Lanka toss winner statistics.  Sri Lanka have an excellent record when it comes to winning the toss in the T20I format.

They’ve won six out of nine so the skippers may change over the years but their good fortune at the toss just keeps on coming. Let’s hope Kusal Perera can keep up his team’s good record because we’re going with them.

Recommended Bet: Back England to win @ 1.8 in Live Betting with 10CRIC

It’s really not easy at all to make any sort of case for Sri Lanka. They’re away from home, and they have a load of important players missing for one reason or another.

Even if they were all there, their team isn’t anywhere the standard of what England have going for them at the moment. To make matters worse, their results have been poor recently.

Sri Lanka’s best bet is to bowl first and try to restrict England to about 175 and just hope that Kusal Perera or Shanaka or someone else can get to a good 50 or 60 and keep them in the game.

But none of that will be easy against this England side. I can’t bring myself to back England at these incredibly short prices of 1.27, so here’s the advice.

Whether England bat or bowl first, let’s hope they start poorly and that they reach odds of 1.8 in live betting. If they do, back them. If they don’t reach those odds, just let it be and save your money for other bets.

Time to bank on an old favourite. Dawid Malan carries on not quite getting the respect he deserves, as evidenced by the fact that he’s the fourth favourite to top score for England here.

It’s all rather odd because as we’ve mentioned several times on this site over the last year or so, he’s ‘only’ the Number 1 ranked T20I batsman in the world.

Maybe it’s the fact that he didn’t have a great Big Bash at Hobart or that he was left out of the Punjab Kings side for the first few IPL games of the season, before coming in and not setting the place alight.

But in his home conditions, while representing England, he’s still the real deal and carries on winning this betting heat time and time again.  He averages 50 when playing for his country and his record of 10 fifties and a century in just 24 games is as good as it gets.

So with all that in mind and with us knowing he’ll bat at three, he’s certainly a bet at 4.5.

Let’s finish things off with some fun stats ahead of this game so you can impress your friends with some top England v Sri Lanka knowledge!

Despite a strong record in the format, Kusal Perera has never scored a T20 or T20I century.
Despite batting low down the order and averaging below 20, Udana has a brilliant strike rate of 144 with the bat in T20Is.
Eoin Morgan is one of the few players in world cricket to have played over 100 T20Is; he’s played 102.
Chris Jordan is England’s top wicket-taker in T20Is with 70, having recently overtaken Stuart Broad.