India Tour of Sri Lanka starts this weekend with India set to take on the hosts in a three-match ODI and three-match T20I series.

The first ODI will be played at the R Premadasa Stadium, Colombo on Sunday, July 18, at 3:00 pm IST.

Up next are our free cricket betting tips for what should prove to be a relatively comfortable match (and the tour) for the Men in Blue.

India are fielding a young squad coached by the legendary Rahul Dravid with Shikhar Dhawan set to captain the team. Meanwhile, Sri Lanka are coming fresh off a series defeat against England, followed by a litany of problems.

Expect a solid performance from the visitors in all departments.

The Lions right now are battling what can only be described as an unfortunate trifecta of troubles.

Firstly, the Lankan contingent (freshly arrived home from the England tour) was hit with multiple cases of Covid-19 that forced the India series to be delayed by five days. The players have started coming out of isolation only recently after returning negative tests and may possibly find themselves with a lack of practice time.

Then there is the matter of internal dispute between the players and the Sri Lanka cricket board over player contracts. The developments there have led to Dasun Shanaka replace Kusal Perera as the captain of the Sri Lanka team for the series against India. Angelo Mathews – one of Sri Lanka’s most experienced players – has also opted out of the series.

Shanaka is untested as a captain – to add to this, Perera himself has been ruled out of the series with a shoulder injury. To make matters a bit more precarious, the official squad is yet to be announced for this match.

And lastly, we have their general form in the white-ball format which hasn’t been that great. Sri Lanka have lost four of their last five ODI series against the likes of England, Bangladesh, West Indies, and Pakistan.

Chaotic may not be the word to use here but the Sri Lanka team are certainly not at their very best heading into this match.

Squad not yet announced.

With India’s main team in England for the Test tour, the BCCI selectors had to choose a ‘B-Squad’ comprising many uncapped players combined with a few seasoned ones, all looking to make their case to be in the team for the T20 World Cup.

Shikhar Dhawan and Bhuvenashwar Kumar are definite starters as the captain and the vice-captain, with plenty of options available in the likes of Manish Pandey, Suryakumar Yadav, Sanju Samson, the Pandya brothers, and others.

For Pandey, it may very well be his last chance to leave a mark on international cricket, having been left on the sidelines for quite some time.

That aside, there is a lot of talent on this Indian side. Many of these players have been particularly impressive in the Indian Premier League and domestic tournaments like the Vijay Hazare Trophy.

A team of this calibre is more than capable of defeating a weary-looking Sri Lanka, at least on paper.

This being a day-night match in Colombo, the teams batting second may benefit from the conditions. The weather for Sunday is likely to be partly cloudy with light showers in places.

We should see a largely uninterrupted match of cricket.

The upcoming match will be their 160th meeting in the one-day international format. India, as expected, lead 91-56, with 11 matches ending in a stalemate.

India have won eight of their last nine ODI meetings against their southern neighbours, with the last one taking place in July 2019. The visitors won that match by 7 wickets. 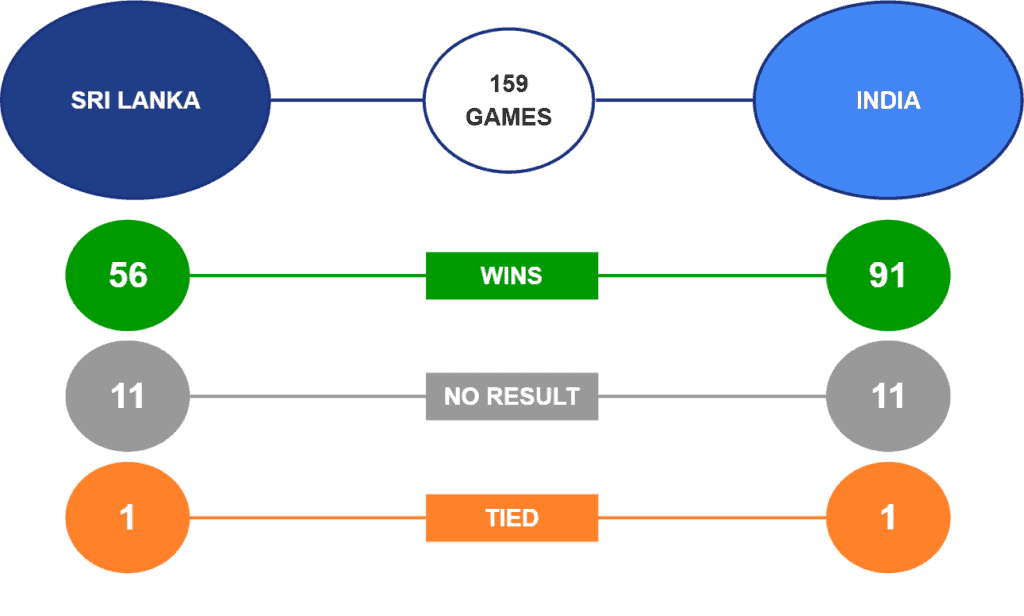 Things are much more evenly matched in the toss department with Sri Lanka leading India by 80-79. Let’s back the Lankans to maintain that steady lead.

Recommended Bet: Back India to win @ 1.16 with Purewin

Shikhar Dhawan and Bhuvaneshwar Kumar both had a splendid series against England back in March, with the skipper scoring two half-centuries. And when you look at the other players assisting their captains, it becomes all the more evident why I’m inclined to back India to win this match.

In many ways, Dravid will be spoiled for choice when it comes to picking his best playing XI. With plenty of promising options in batting and bowling, it is one of those good problems to have as a coach.

For instance, Chahal and Kuldeep Yadav had a terrific time with the ball when they last played the Lions in Sri Lanka. While these players are on Dravid’s list, it will be intriguing to see who else he goes with to complement his bowlers.

Additionally, their preparations for the series have been uninterrupted and free from Covid-19. All in all, the Indian camp is in good spirits and looks confident of an excellent tour against Sri Lanka.

Also, check out this Pure Win review for a reminder of why it’s one of our leading choices for sports betting in India.

Back a Century in the Match

Recommended Bet: Back a century in the match @ 1.80 with Betway

The conditions are favourable for us to see an entertaining game of cricket, one wherein Indian batsmen will go up against the not-so-in-form Sri Lankan bowlers.

Plus, it is easy to score big runs in Colombo with four of the last five matches here seeing average first innings score upwards of 280 runs. A majority of these games also saw players strike 90+ runs but falling just a few runs shy of a century.

Given the presence of batting talent here, it is not entirely unreasonable to expect a century.

Recommended bet: Back Shikhar Dhawan to be India Top Batsman  with 10CRIC

As we said earlier, Dhawan is a definite starter and will have plenty of time to bat and play a big inning. He scored 67 in his last ODI against England while in the first match of that series, Dhawan scored a brilliant 98.

Plus, one of his highest scores in the one-day international format have come against Sri Lanka – a handsome 132 not out in August 2017.

He is available at decent odds and makes for an attractive bet.

Sri Lanka have won their last five ODIs at the Premadasa Stadium, beating Bangladesh, Sri Lanka, and England on the way
Their last defeat at the venue came at the hands of a team none other than India in 2017
Sri Lanka’s biggest upset against India came in the ICC Champions Trophy 2017 – the Lankans chased down the target of 322 runs and won by 7 wickets
India last toured Sri Lanka for an ODI series in 2017 and won 5-0