Belgium will look to seal their play-offs berth when they face a rather dejected Denmark in their second Group B match of the 2020 UEFA European Championships.

The game will be played at the Parken Stadium, Copenhagen and will start at 6:00 pm local time (9:30 pm IST) on Thursday, June 17.

The upcoming game will no doubt be overshadowed by the distressing events in the first half of the Denmark-Finland game.

Christian Eriksen suffered a cardiac arrest and collapsed on the pitch but thanks to the quick actions of surrounding players, the medic team, and the referee, the Danish midfielder was revived. He has been recovering since at a hospital and has issued a positive update on his health.

Needless to say, it will be difficult for the Danes to forget these images anytime soon. Add to this their subsequent 1-0 defeat against the Finns in that opening match, their chances of progressing become all the more difficult.

On the other hand, Belgium look primed to go through to the next round following a brilliant 3-0 win against Russian in the opener.

My betting tips for this Denmark vs Belgium Euro game will favour the Red Devils.

The Danes will be without the services of Eriksen and that spot is likely to be filled by Mathias Jensen. That said, football is understandably the least of their concerns right now.

Kasper Hjulmand will certainly prioritise the well-being of his players and ensure that they are ready ahead of this critical match. He has the entire squad available at his disposal.

But in light of the recent events, it is hard to imagine them navigating this fixture with the kind of mental clarity and focus needed to face the number one ranked team in the world. Case in point, Denmark’s Pierre-Emile Hojbjerg missed a penalty and a potential chance to salvage a draw against Finland – something which no one can hold him against.

Nonetheless, Denmark will look to play the 90 minutes with all their might. Their efforts to keep the show going on are commendable and the entire nation and the world of football will certainly be cheering for them.

Belgium defeated Russia 3-0 in that opening game, courtesy of a superb brace by Romelu Lukaku. He also paid a tribute to his fellow Inter Milan teammate who was then at the hospital, recovering.

All things considered, Roberto Martinez’s men are now on a 10-match winning streak and certainly look to be the favourites to proceed further into the tournament.

The manager will also be pleased with the news of Kevin de Bruyne recovering well from his facial fractures, potentially making him available for the next round of matches. Plus, Eden Hazard also had a 20-minute cameo against the Russians in the first match and may very well find himself playing a key role in this upcoming fixture.

While you can expect the Belgians to win this match, you must remember that many of their players share a close relation with Eriksen and recording a big here win may be the last thing on their minds.

The two teams have met 15 times and both of them have beaten each other six times each, with the remaining three matches ending in a draw. Belgium and Denmark most recently locked horns in the group stage of the UEFA Nations League this season. The Red Devils won 6-2 on aggregate, beating the Danes in both legs.

However, in the Euros, this is their first meeting since the qualifiers in 1994-95. Denmark won both those legs by 3-1. 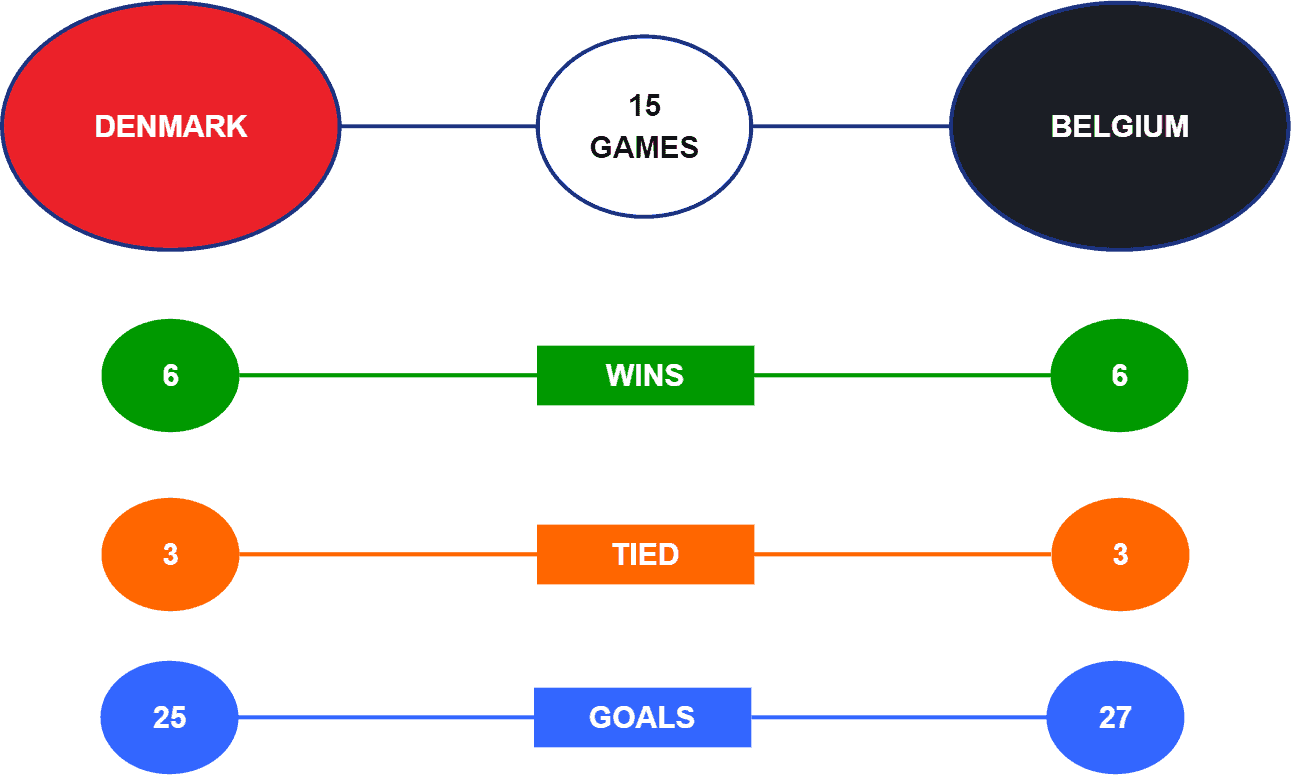 Recommended Bet: Back Belgium to win @ 2.05 with Casumo

There is no doubt that Belgium will empathize with Denmark for what they are going through right now but for the 90 minutes of the game, they will be in it to win.

Under any other circumstances, I would have predicted a big win from the Red Devils but this time around, a muted victory will do the trick. Objectively speaking, their players are quite superior to Denmark’s, like for like.

Expect the Belgians to seal the playoffs berth here.