England are out for revenge against Croatia, after that semi-final defeat at the last World Cup.

They’ll get the chance when they take to the field at Wembley on Sunday June 13, with a 6.30 pm IST kick-off.

It’s a big game at the Euros that can put the winning side in pole position to advance and the losing one under pressure.

We’re about to give you the all-important background to this match and the latest team news, including injury doubts and players who are definitely out.

But first, here are today’s Euro 2020 match predictions, including why we think the smart money is on the draw.

England are likely to be without experienced Manchester United man Harry Maguire, who is injured and highly unlikely to feature in this match. He should however be all right to play at least the last of the Group games.

That should mean a rejig in defence, so it’s a good thing that the England squad is packed with defenders. It means Gareth Southgate has plenty of choice in this regard.

In midfield and attack a few players like Declan Rice, Mason Mount and Harry Kane are nailed on to play but it’s not so easy to work out who the others may be.

For example, Raheem Sterling, an automatic start over the past few years, may have to settle for a place on the bench.

As per usual, Croatia’s strength is in midfield.

Luka Modric, Player of the Tournament at the last World Cup, isn’t getting any younger. But he’s still a class act in what should be his final major tournament.

He’ll be joined in midfield by Chelsea man Mateo Kovacic, who’s fresh from winning the Champions League in an extremely strong midfield pairing. Ivan Perisic is a class act as well on the left.

But they don’t have too many natural goalscorers in attack, which could be a problem.

But across the 10 matches they’ve played against each other, it’s five wins for England, three wins for Croatia and two draws.

Croatia won the one that really mattered-  that semi-final at the last World Cup- but England then hit back to beat them in a Nations League game, winning 2-1. 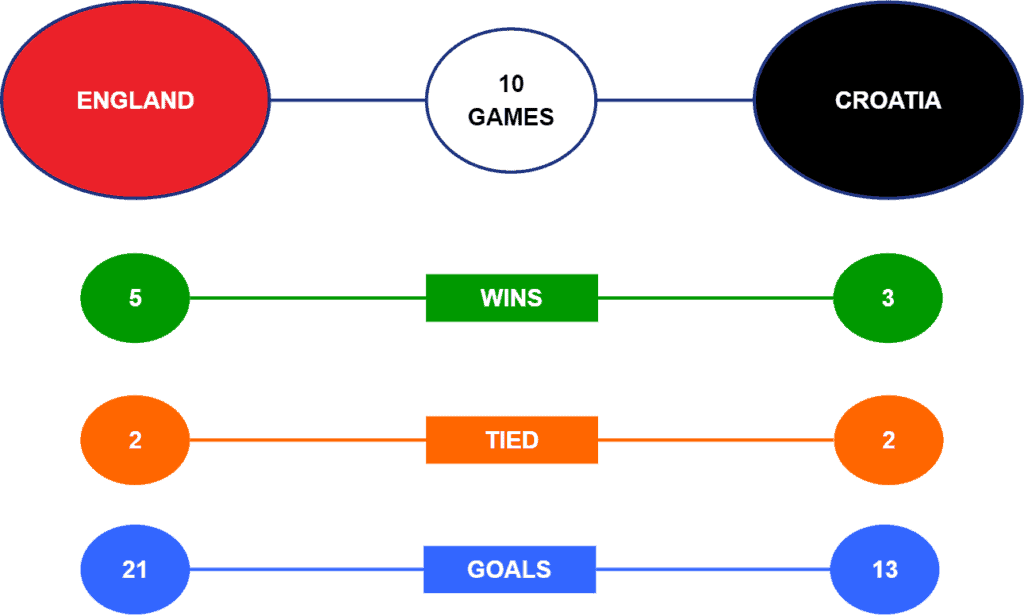 England have won all of their last five games, including beating fellow Euros teams Poland and Austria.
Luka Modric has a remarkable 138 caps for Croatia, scoring 17 goals.
Other than the last World Cup, they’ve only ever met once at a major tournament: a 4-2 win for England at Euro 2004.
Croatia defender Dejan Lovren was booked in both of his last appearances against England.

Recommended Bet: Back the draw @ 3.85 with Casumo

You can see why England are the 1.65 favourites to win the game with a much higher ranking, better players, superior recent results and home advantage. They’re also slightly ahead on the head to head though not a case of real dominance.

But Croatia are always tough and their own team looks in decent shape.

The first game in any tournament is always tough and if Croatia are disciplined and hard-working while taking a chance if it comes their way, they can get something from the game.

Recommended Bet: Both teams to score@ 2.25 with 10CRIC

Croatia may lack a natural goalscorer but that doesn’t mean they don’t score goals.

Croatia scored in 11 of their last 13 games and interestingly, both teams scored in five of the last six between them and in seven of the full 10.

Add the absence of Harry Maguire and that could spell a further reason why Croatia might get a goal. We have little doubts that England will get one so go with both teams to score.

Mason Mount to be Anytime Goalscorer

Recommended Bet: Mount to be anytime goalscorer @ 5.00 with 10CRIC

Mason Mount is definitely guaranteed a game after a strong season for Chelsea where he was among their more consistent players, while also contributing with plenty of goals and assists.

He managed 12 goals for the season and seems to have a knack for scoring important ones rather than easy goals. He won’t be on penalty duty here because  Harry Kane will take them but there’s no reason why we can’t score from a late run in the box or long-range shot.