Hungary will play host to the defending champions Portugal in their first group match of the UEFA European Championships 2020.

Portugal, led by the iconic Cristiano Ronaldo, will start this match as the overwhelming favourites after a pretty solid performance in their Euro qualifiers, as well as the build-up matches in 2021.

Meanwhile, Hungary will fancy their chances too, seeing that they are now on an 11-match unbeaten streak. However, this will be a tough game for Marco Rossi’s men since like for like, his playing XI are certainly not as prolific as Portugal’s.

Hence, the obvious choice is to back a win for Portugal here. 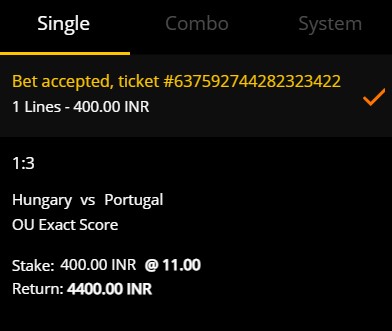 Fernando Santos’s men will be eyeing a strong start here, given that their remaining Group F fixtures will only get difficult from this point on (they face Germany on June 19 and France on June 23).

In the last Euros, Portugal finished third place in the Group (Hungary topped that table) but eventually moved on to win the championship on the back of some solid defending and plays.

As for their performance on the international stage, Os Navegadores have lost just two matches in their last 23. They lost just one match in their Euro qualifying campaign – a 2-1 loss to Ukraine – and finished second in their table. However, Portugal did fail to defend their UEFA Nations League title by finishing behind France in their group.

In 2021, they have drawn two and won three in their five matches so far. Barring a 2-2 draw against Serbia in the World Cup qualifiers, they had a smooth run there. In the pre-Euro friendlies, they held Spain to a goalless draw and followed it with a 4-0 rout of Israel.

Coming to the talent, Santos has got an incredible selection of players to choose from. While all eyes will be on Ronaldo, he will have a great deal of support from the likes of Manchester United playmaker Bruno Fernandes, City Bernardo Silva, Joao Moutinho, and Pepe.

Hungary qualified for the Euro 2020 by the skin of their teeth. They finished fourth in their qualifying group of five teams with four wins and four defeats. However, they were eligible for the playoffs owing to their superior finish in the preceding season’s Nations League.

Marco Rossi’s men did not waste any time in beating Bulgaria and Iceland to reach the main draw.

However, Nemzeti Tizenegy will certainly miss the services of the talented RB Leipzig midfielder Dominik Szoboszlai due to injury. He was instrumental in Hungary’s qualifying campaign and his absence will be a huge blow to the team.

That said, Hungary are unbeaten in their last 11 and have recently put up commanding wins over San Marino (3-0) and Andorra (4-1). They also beat Cyprus 1-0 in the friendlies before ending their summer tournament preparations with a goalless draw against the Republic of Ireland.

Hungary finished third in the Euro 1964, fourth in the 1972 edition and did not qualify for the tournament up until 2016. There, they eclipsed Portugal for a top place finish in the group but were thrashed 4-0 by Belgium in the round of 16.

A strong start by Hungary here will leave the fans dreaming of the possibilities but that looks quite difficult here.

Portugal and Hungary have crossed paths 13 times since their first meeting in 1926 and the Lusitanian side is yet to lose their northern neighbours.

Portugal have emerged victorious on nine instances, including beating them in the 2018 World Cup qualifiers over the two legs by 4-0 aggregate.

Recommended Bet: Back Portugal to win @ 1.45 with Casumo

All things considered, Portugal and Hungary are both coming in this match on the back of a superb run in the games preceding the European Championships 2020.

But A Selecao have an upper hand here, namely in the superior quality of their players, the Ronaldo factor, and the fact that they are the defending champions. Plus, this team is fairly stronger than what we saw in 2016. Moreover, Portugal have kept a clean sheet against the Hungarians in their last four wins.

However, the home advantage for Hungary can just as easily negate those advantages to some extent.

This match should end in a win for the visitors but it may not be a clean, clinical win as some are predicting it to be.

Bruno Fernandes to be Anytime Goalscorer

Recommended Bet: Fernandes to be anytime goalscorer @ 3.60 with Betway

The 26-year-old Bruno Fernandes was Manchester United’s leading goalscorer in the 2020-21 season (28 goals in all competitions). He also scored a brace in the 4-0 rout against Israel recently and is definitely coming off a fine form.

He will play a key role in Portugal’s attack, making it much more likely that he may find an odd goal or two in this game.

Let’s look at the facts – three of the last five meetings between the two teams have seen over 2.5 goals.

Given the attacking talent that lies with Portugal and this being a home game for Hungary, it is more than likely that we will see goals from both sides. We are predicting that it will be one of those high-scoring games rather than a dull, mundane draw.