Italy will look to continue their winning start in the Euro 2020 when they face Switzerland in Group A.

Before we begin, we sure to check out our list of top online football betting sites in India where you will find great odds and diverse markets.

Italy look to be the favourites heading into this fixture on the back of their brilliant, 3-0 rout of Turkey in the opener. The Swiss, on the other hand, had to settle for a hard-fought 1-1 draw against Wales.

Plus, given the superior squad quality of Gli Azzurri, they are on track to outclass Switzerland too in this upcoming Euro match.

Consequently, our betting tips and predictions for this Italy-Switzerland game will favour the hosts.

Immobile to be anytime goalscorer
2.15
Betway 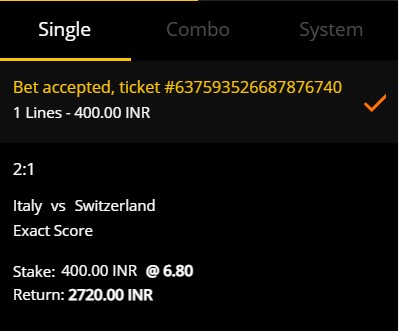 Last Friday saw Italy pick up a remarkable 3-0 victory over Turkey at the colosseum in Rome, courtesy of an own goal by Merih Demiral and some brilliant strikes by Immobile and Insigne. The Italians also had 24 shots in that game compared to Turkey’s three.

With that win, the Azzurri have extended their winning streak to nine matches spanning across the UEFA Nations League, 2022 World Cup Qualifiers, international friendlies.

What is even more impressive is they have kept a clean sheet in all these nine games.

The last time Italy failed to win was against the Netherlands in October 2020 in a Nations League game – the hosts drew by 1-1.

Ever since Roberto Mancini took over the charge of the Italian team, he has reinvented the side in his own image, combining sheer experience with skilful, young talent.

The end result – Italy have gone unbeaten in their last 28 games (the last defeat coming in September 2018).

For this upcoming game, it is quite unlikely that the former Manchester City manager will make any unneeded changes from the last game’s playing XI.

Switzerland’s opening-round game against Wales didn’t go as planned. Despite getting an early lead from Breel Emobo, they couldn’t quite hold on and ended up settling for a 1-1 draw. It is worth mentioning that the Swiss had twice as many shots and possession Wales.

They will travel to the Italian capital, hoping to salvage a draw at the very least because getting a win against the Italian giants is too tall of an order.

That said, there is some promise in this Swiss side with Granit Xhaka and Xherdan Shaqiri expected to put some pressure and lead the charge on the experienced, capable Italian defenders. Switzerland have lost just one match in their last nine Euro games – including the qualifiers.

However, did they have a pretty horrible campaign in the Nations League with just one win (an awarded victory) in their six-match campaign.

Even before the summer tournament started, Vladimir Petkovic’s men had a pretty decent run in 2021, winning all of their five games spanning across the WC qualifiers and the friendlies. Over there, they picked up wins over the likes of Bulgaria, the United States, and Finland.

However, this Italian team is unarguably the toughest opponent they will be facing in quite some time.

As for their encounters in the European Championships, they are meeting for the first time in the competition since the qualifying games for the 2000 edition. Italy won the home leg 2-0 and drew away leg 0-0.

Switzerland’s manager Petkovic marks his return to the Olimpico Stadium, having served as Lazio’s manager between 2012 and 2014
Italy and Switzerland last faced off in a 2010 international friendly. The game ended in a 1-1 draw
La Nati last beat Italy in the FIFA World Cup Qualifiers in 1993 by 1-0
Switzerland have never made it past the quarterfinal in the World Cup and the Round of 16 in the Euro Cup
Italian veteran defenders Bonucci and Chiellini have over 200 caps between them

Recommended Bet: Back Italy to win @ 1.57 with Casumo

Italy are the heavy favourites to win this match, it is just a matter of how they do it.

The four-time world champions have been in phenomenal form, dismantling every opponent that comes their way with absolute ease. Defensively, they have been nothing but brilliant and will look to maintain the same momentum against the Swiss.

Plus, having the home advantage is always an added benefit. Mancini will look to seal the Round of 16 berth right here and with a game in hand, he can look at resting some key players.

Switzerland will look to push for a draw (if not a win) but even that will be demanding, given the depth of Italy’s attack.

Recommended Bet: Immobile to be anytime goalscorer @ 2.15 with Betway

Barring any freak accidents, Immobile is bound to start for the Italians. He scored in the opening match against Turkey and may very well score again when facing the Swiss.

Plus, he is the leading goalscorer for the Azzuri in the squad at the moment and the 31-year-old will be keen on adding further to that tally.

The Italians have scored over 2.5 goals in their last three victories while keeping clean sheets all the way. Those opponents, however, were not as challenging as the Swiss.

While we can expect Italy to have another good scoring game and pick up the win, it would not be surprising if they end up conceding an odd goal or two here. All in all, our betting tips in this market are bound to favour an outcome that sees at least three goals in total.