Italy will look to finish the group stage round on a winning note when they take on Wales in Group A in the European Championships 2020.

Two for two, Italy are already through to the playoffs with some brilliant attacking and defending. Roberto Mancini’s side looks confident of delivering a title-winning run here in the Euros.

Meanwhile, Wales are assured of a top-three finish but a positive result here definitely put them in second place, not leaving things wide open.

For this fixture, we will have to go with Italy once again, simply because of their superior squad and form.

Locatelli to be Anytime Goalscorer
5.75
Betway 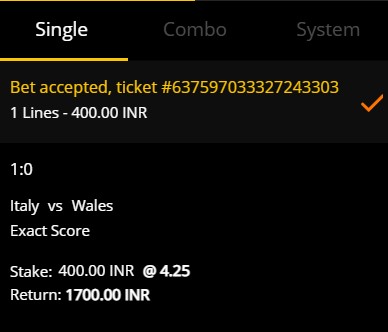 Six goals in two matches, zero goals conceded – Italy are on fire in the Euros at the moment. After beating Turkey in the opener by 3-0, they defeated Switzerland by the same score in the next match.

Needless to say, they have sent warning shots to the rest of the contenders in the tournament that they are the team to watch out for.

What is even more impressive is the Azzurri have not conceded a single goal this year across three separate competitions. The defensive combination of experience and young blood at the back (or throughout the team for that matter) has worked superbly for Mancini.

Since taking over the reins, the Italians, under the former Man City manager, have gone unbeaten in their last 29 matches. This marks a phenomenal turnaround in their form, seeing that they missed out on qualifying for the 2018 World Cup.

So far in the Euros, Immobile and Insigne have been on the mark but the fact that 23-year-old Locatelli also found his groove against Switzerland (with a remarkable brace) is just an added cherry to the top of this brilliant cake.

The Dragons put up a brilliant show against Turkey in the second Group A match in the Euro 2020, beating them 2-0 to pick up the three crucial points.

Combined with the one point from that 1-1 draw against the Swiss in the opener, Wales have got a very real chance of finishing at second place and booking their seat in the playoffs.

If it helps, history on their side – playing in their very first Euros in 2016, the Gareth Bale-inspired outfit shocked everyone with a semifinal run. If they manage to get the Italian job done, there is no reason why they can’t do it again.

A draw will do the trick while a win will put them through to the next round as the Group A winners. A defeat, however, may make things tricky. If Switzerland win, it comes down to goal difference (Wales are much superior). If the Swiss lose, then there is nothing to worry about.

Rob Page has got no major injury concerns to deal with – his only real challenge on Sunday is to survive the Italian onslaught in Rome’s football colosseum.

No surprises here – Italy have been the dominant side in the fixture, picking seven wins in their nine meetings to date. 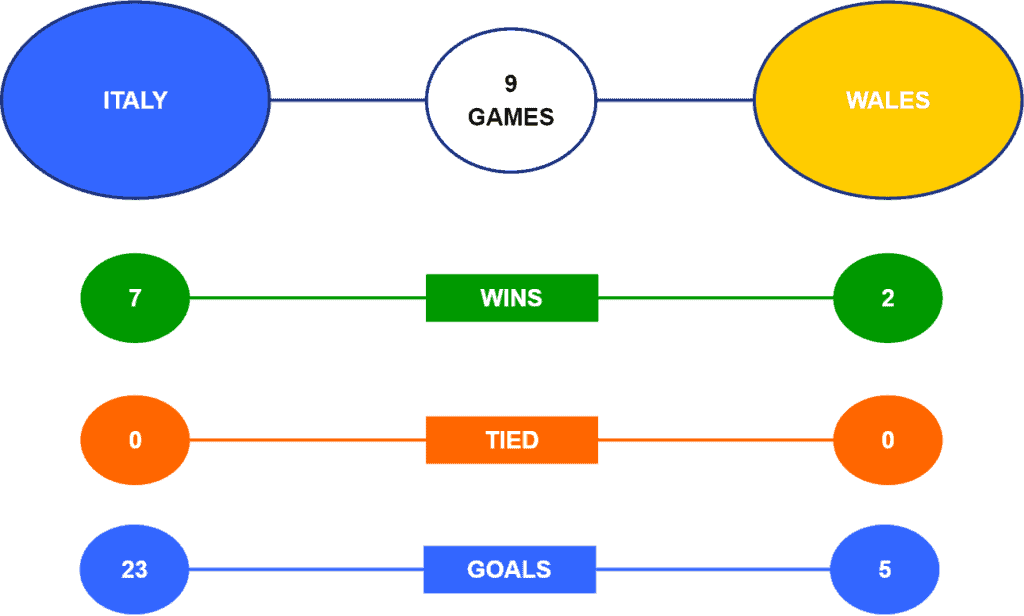 Recommended Bet: Back Italy to win @ 1.47 with Casumo

Italy look all primed to end their group stage with the perfect score of nine points from three wins. Even though Mancini is likely to rest his key players to the next week’s playoffs, there is enough depth in this team to get the win.

The likes of Chiesa and Belotti will be hoping for a chance to leave their mark while Marco Verratti can look at this match as a good exercise to get some more minutes under his belt.

Plus, their impeccable home advantage is always there to make the task easy for the Azzurri. That said, Wales will put up a fight and this may be the match where their clean sheet streak is broken.

Locatelli to be Anytime Goalscorer

Recommended Bet: Locatelli to be anytime goalscorer @ 5.75 with Betway

The 23-year-old Manuel Locatelli was on point for Italy in the game against Switzerland. The Sassuolo forward played a good number of minutes in his third consecutive match for his national side, implying the kind of faith Mancini has in this youngster.

Young and firing on all cylinders, we can expect Locatelli to play another key role for Italy in the Wales match. Given his form and the odds at which he is available, he definitely makes for an attractive bet.

Under 2.5 Goals in the Match

Wales will bring their best foot forward but it is quite unlikely for them to beat the mighty four-time home champions on their home turf.

We don’t expect them to concede that many goals either as goals difference will prove to be a key deciding factor on who makes it to the next round (should they lose this one).

In all likelihood, we will see a defensive game here with not that many goals in the making.