Germany will welcome Portugal in their second Group F match of the European Championships 2020.

Portugal will look to seal the deal with a win over mighty Germany, having won their first fixture against Hungary with a comfortable margin of 3-0.

As for Die Mannschaft, they will feel the pressure on the back of that 1-0 loss to the tournament favourites France.

Germany will start this match as the odds-on favourite but if there was a time to bet on the underdog, now would be it. Portugal are looking quite good and will definitely fancy their chances of delivering a huge upset.

Hence, our betting tips for this Portugal-Germany game will favour them.

Ronaldo to be Anytime Goalscorer
2.25
Betway 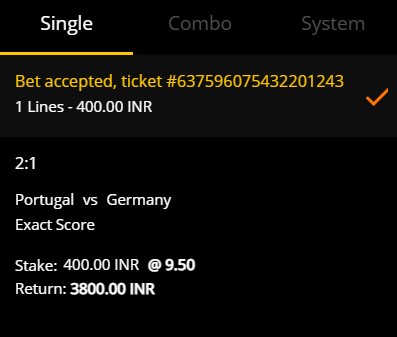 In the opening match against Hungary, Os Navegadores were the dominant side for most of the 90 minutes. The only frustrating part was not being able to crack the defence earlier in the game. But boasting a 70% possession, it was only a matter of time before they got through.

Raphael Guerreiro broke the deadlock in the 84th minute and Ronaldo later put the match to bed with a brilliant brace. Those goals also made the 36-year-old the leading goalscorer in the tournament’s history.

Portugal have now lost just one match in their last 14, and are unbeaten in their last seven. The defending champions have been quite exceptional of late and with a rich pedigree in the Euro Cup (three-time semifinalists, 2004 runner-ups), they will fancy another deep in this season’s Euro Championship.

Plus, this being Ronaldo’s last Euro Cup, we can definitely expect him to give it all and then some more. He has also got the right contingent of players to help him get the job done.

That said, Germany will be tricky opponents but they are not at their very best yet. Fernando Santos is certainly adept enough to navigate this fixture and somehow clinch a win.

The start of Joachim Low’s final campaign with Germany did not go according to the plan. Facing the World champions France, they fell victim to an own goal by Mats Hummels.

In terms of possession and shots, Germany were certainly the superior side but owing to France’s individual player quality, they never quite managed to get one up against their French opponents.

Now they face a rather determined and confident-looking Portugal. Even though they have enjoyed superiority over them through the years, their chances of doing so again this time are low. The Germans are simply not looking as sharp as they once did.

This defeat to France was the second one for Germany in 2021 – they were beaten by North Macedonia 2-1 in the World Cup Qualifiers in March. They followed that with a 1-1 draw against Denmark in an international friendly.

Plus, they also exited the UEFA Nations League last year when they failed to make it to the final playoffs. With just two wins in a six-game group stage, the last match of which ended in a 6-0 defeat against Spain for the Germans, it is fair to say that Portugal can definitely make life difficult for them here.

The two teams have met 18 times with Germany winning 10 of those matches.

Portugal have managed just three wins, the last of which came in the 2000 Euro Cup where they reached the semifinal.

The two teams last met in the 2014 World Cup Group G game, where Germany won 4-0 to move on to win the tournament
Ronaldo overtook Michel Platini to become the top goalscorer in the European Championships with 11 goals and counting
Portugal have kept a clean sheet in their last three matches now
They are also unbeaten in 22 of their last 23 European Cup games

Recommended Bet: Back Portugal to win @ 3.25 with Casumo

If this were a match against the once-formidable Germany side, then pushing for a draw would have been the ideal outcome here. However, Germany at the moment are vulnerable and Portugal are in the perfect position to exploit that weakness.

The Ronaldo-powered engine can definitely wreak some damage to a nervy-looking German defence. Portugal’s attacking prowess is quite intimidating with the likes of Bruno Fernandes, Jota, and Bernardo Silva supporting the Juventus forward.

That said, A Seleção are at a disadvantage playing away from home. But France proved that beating Germany in the famed Allianz Arena is not that difficult of a job, especially when their opponents are not that sharp.

Ronaldo to be Anytime Goalscorer

Recommended Bet: Ronaldo to be anytime goalscorer @ 2.25 with Betway

Cristiano Ronaldo is firing on all cylinders and it is quite likely that he will continue to do so for the rest of the tournament.

He has that will to win and can singlehandedly shape the course of the match, irrespective of the opponents. Plus, as Portugal’s leading goal-scorer, he makes for the far safer and obvious bet.

It is a must-win game for Germany, implying they will look to score. But Portugal have a superior attacking line-up and should they find ways past the defence, there is no stopping them from delivering a huge win.

This match has all the makings of being a decent goal-scoring affair.