World No. 1 Belgium will take on the four-time world champions Italy in the quarterfinal of the European Championship 2020.

This is a quarterfinal worthy of being a final in itself as two European heavyweights collide in this clash of the titans.

Both teams are heading in this fixture after a perfect start to their Euro Cup campaigns. Plus, both sides have enjoyed a great run in the build-up to the Euros, as well as the last couple of seasons.

Italy have lost just one game since September 2018 – in the same duration, Belgium have been beaten just twice.

While this is an evenly matched fixture, Italy will start as the favourites owing to their incredible lineage on the international stage and the squad they have.

Immobile to be anytime goalscorer
2.80
Betway 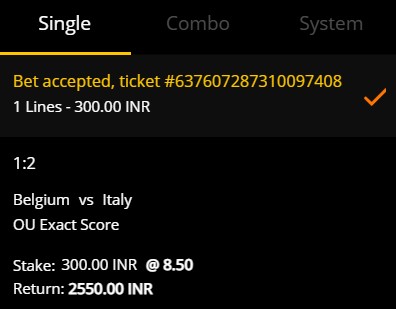 Belgium are heading in this match after ending Portugal’s bid to successfully defend their Euro title. Thanks to a beautiful stunner by Thorgan Hazard, the Red Devils sailed into the quarterfinal on the back of a 1-0 win against the current champions.

However, that win came at far too big of a price – the Portugal match saw Kevin De Bruyne and Eden Hazard come off with injuries, quite possibly making them unavailable for this crucial tie with Italy. But as the number one ranked team in the world, they do have sufficient talent in their ranks to fill in the voids.

Just like their Italian counterparts, Belgium are on an unbeaten run in 2021, winning seven of their nine games (two ending in a draw). They have also won each of their last 14 games in the European Championship – starting from the qualifiers through to these main matches.

Leading Belgium’s Golden Generation in what is possibly their last shot at a major trophy, Roberto Martinez has done everything right so far. From defending exceptionally well to bringing in the goals when needed, Martinez has formed a team worthy of becoming the champions.

Even in their Group B games, they sailed through with a perfect tally of nine points; they beat Russia 3-0, Denmark 2-1, and Finland 2-0. Lukaku has scored three goals so far and remains in the race to win the Golden Boot.

The Italians had to fight hard for their quarterfinal berth, something not many would have expected in light of their recent form. Relying on extra-time strikes by the substitutes Federico Chiesa and Matteo Pessina, Italy managed to beat Austria 2-1 in what was one of their most demanding matches in quite some time.

But it certainly seems apt for them to go through something like this in the Round of 16, given that they were well on their way to meet one of the strongest teams on the continent.

With that win over Austria, the Azzurri have set a new national record – going 31 games unbeaten – a record held previously by Vittorio Pozzo back in the 1930s.

Roberto Mancini has invented a team in his image that leverages the best of experience and young talent. Since taking over the charge back in 2018, Mancini ushered Italy through over 2,700 minutes of football without losing a match. Having dropped out of the football scene over the last several years, Italy are now primed for a huge comeback.

The 2012 Euro Cup runners-up have had a flawless campaign in the tournament, winning all three of their group games with zero goals conceded. 22-year-old prodigy Gianluigi Donnarumma has been instrumental in helping keep the four-time World Cup winners clean sheets.

In the goals department, the likes of Manuel Locatelli, Pessina, and Chiesa have assisted the old guards like Ciro Immobile and Lorenzo Insigne.

In the head to head tally, Italy have established a clear dominance with 14-4 from 23 matches played.

They last met in the Euro Cup 2016 group stage with Italy winning that match by 2-0. 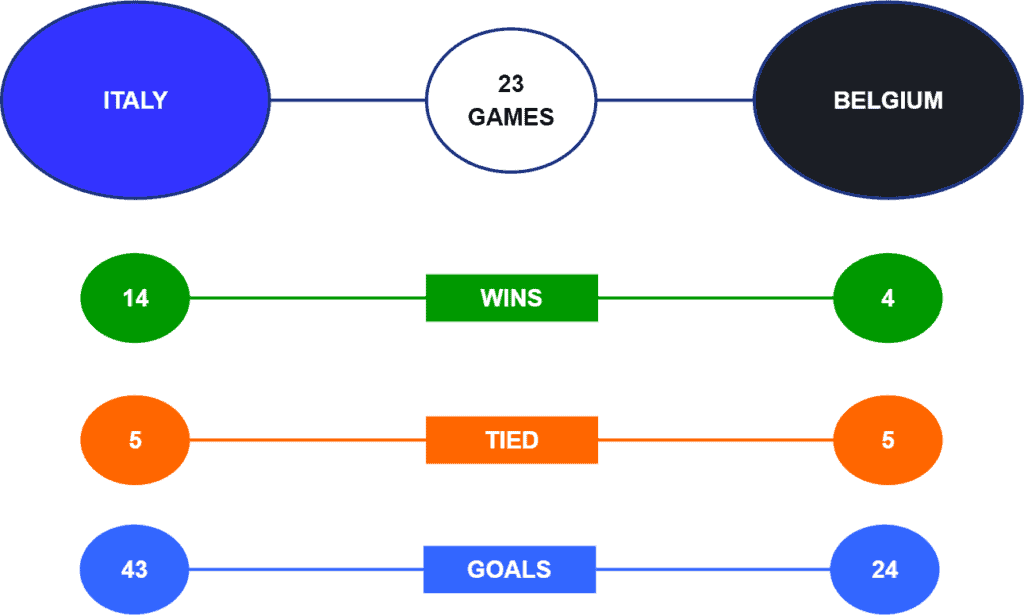 Italy have conceded just one goal in their last 12 matches
In the same number of games, Belgium have conceded six goals
The Italians have kept a clean sheet in seven of their last eight matches
Belgian’s sole win over Italy in a major tournament came in the Euro Cup 1972

Recommended Bet: Back Italy to qualify @ 1.68 with 10CRIC

Both sides are facing one of their toughest matches in quite some time. Italy, however, seem better prepared for this.

For one, they have a considerably stronger defence with Giorgio Chiellini and Leonardo Bonucci standing tall at the back. This Italian wall has not conceded that many goals in their 31-match unbeaten streak.

Secondly, they do not have any significant injury concerns – if anything, Mancini may face a selection dilemma seeing that each one of them has been exceptional in the last couple of weeks. On the other hand, Belgium may have to find a way to play without their key players like Hazard and De Bruyne. Romelu Lukaku will be under pressure here to rise up and perform.

Italy may have faced some problems against Austria but the fact that their substitutes came on to win the game tells us about the depth of this talent-rich squad.

Whether this goes into extra time or not, Italy have all the necessary ingredients to win this one and reach the semifinal.

Ciro Immobile to be Anytime Goalscorer

Recommended Bet: Immobile to be anytime goalscorer @ 2.80 with Betway

Immobile couldn’t find the next in the last match but he still remains a key cog of Mancini’s attacking plans for Italy. Plus, he started well with two goals in two matches.

The Lazio striker is set to play a good number of minutes once again and from a Belgium v Italy betting perspective, he makes for an appealing bet in the goalscoring market.

If the last round is any indication, we may be in store for yet another entertaining, goal-scoring match. Austria managed to score against Italy – by that standard, Belgium, given their superior attacking strength, ought to be able to do the same.

We are likely to see goals from both sides where the total count can exceed 2.5.