It is a battle of the underdogs in the European Championship 2020 as the Czech Republic will play Denmark in the quarterfinal.

Both teams have had similar runs in Euros so far but going by the pedigree and overall form, Denmark will start as the favourites.

The Danes are in an incredible goal-scoring form at the moment and haven’t lost that many games this year when compared to their Czech counterparts. Plus, this is an outfit that looks determined, confident, and most importantly, inspired.

As a result, the betting tips for the Czech Republic-Denmark game will favour the Danish side. 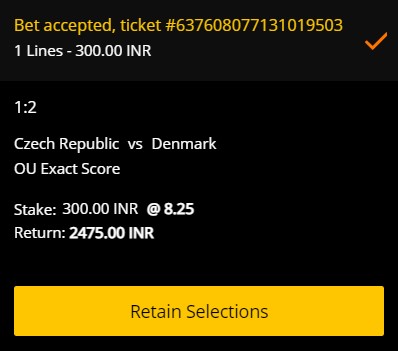 The Czech Republic have been nothing short of splendid in the European Championship so far – something that not many would have expected of them. They have established themselves as the dark horses of the tournament, posing a serious threat to others in their bracket.

In the Round of 16, they knocked out the heavy favourites the Netherlands on the back of a 2-0 victory. The Lokomotiva capitalised on a red card picked up by the Dutchmen alongside putting up a stellar performance. Tomas Holes and Patrik Schick scored the two goals that saw them through to the quarterfinal.

Starting the Euros with a 2-0 win over Scotland and a 1-1 draw against Croatia, Jaroslav Silhavy’s men were pretty much set to reach the playoffs. A 1-0 loss to England in the final group game saw them drop to third place and set the Netherlands clash.

The Czechs’ recent record in the Euros comprises a runner-up feat in 1996 and a semifinal run in 2004. They also made it to the quarterfinal in 2012 but in the last edition, they couldn’t quite move past the group stage.

In all fairness, consistency has never been among their strong suits but they do have the ability to stun their opponents. Patrik Schick has brought in the most number of goals so far and the onus will be on him to deliver against Denmark too.

Following the harrowing events in their opening match of the tournament against Finland, Denmark have moved on to make a remarkable recovery. The team seems inspired and is on a mission to win this one for the country, for themselves, and for Christian Eriksen.

The Danes finished second to reach the knockouts, despite losing two of their three group stage games – something that no other team had managed in Euros before. Following defeats to Finland (1-0) and Belgium (2-1), they beat Russia 4-1 to qualify on the heels of a superior goal difference.

In the knockouts, Denmark met Wales and put up yet another stunning performance – this time, beating them 4-0 to advance to the quarters. With eight goals in the last two games, the Red and White will definitely believe that they are capable of reaching the final and possibly, going the distance.

This is the first time that the 1992 Euro Cup champions have made it this far since the 2004 edition. It is certainly a remarkable feat, considering that they did not qualify for the tournament in 2008 and 2016.

As for their overall performance, Denmark are certainly on the superior side when compared to their Czech adversaries. They have lost just two games this whole year and are considerably ahead in the FIFA World Rankings – No. 12 v No. 43.

In the 11 times the two sides have met, the Czech Republic have come out on the top with a 3-2 lead, with the remaining six matches ending in a draw.

Recommended Bet: Back Denmark to win @ 2.12 with Casumo

Seeing how Denmark have fared in their last couple of matches, it is quite evident that they are on a warpath to win and make the distressing events from their opening match worth it.

As the superior side in terms of ranking and overall player quality, it is quite difficult to imagine them succumb to the Czech Republic, especially when their opponents have not been consistent.

This will be a good game but Denmark should be able to book the semifinal berth without needing extra time.

Martin Braithwaite to be Anytime Goalscorer

Recommended Bet: Braithwaite to be anytime goalscorer @ 3.80 with Betway

Braithwaite is a definite starter for Denmark in the attacking line-up. With a late goal in the last match, the 30-year-old will fancy his chances of adding yet another international goal to his tally when his team takes on the Czech Republic.

Additionally, he is available at superb odds – all the more reason to back him on this bet.

Denmark’s last three matches in the Euros have seen over 2.5 goals. We are in for another such game, especially given that the Czech Republic too have a strong tendency to score. Even though they have been quite stubborn, defensively speaking, a couple of goals or extreme pressure can force them into submission.