In the fourth quarter-final of the Euros, it’s Belgium up against Portugal in Seville. The game will start at 12.30 am IST on Monday June 28 and it pits two of the best teams in Europe, and also two of the tournament favourites, up against each other.

There’s a feeling that whoever wins this match could well go on to win the whole competition so all eyes will be on events in Seville.

We have the best Belgium v Portugal predictions up next for you.

So on to today’s Euro 2020 match and our predictions.

Our three best bets are below and we also explain why we think Portugal are the selection to progress, though they may need extra time and penalties to do so.

Having done all the heavy lifting in the first two matches, Belgium were able to pick whichever side they fancied for their third game against Finland knowing they were already top of the group.

That meant the likes of Youri Tielemans and Jan Vertonghen got a rest, while Romelu Lukaku will be glad to have got another goal under his belt.

The only real doubt here for Roberto Martinez when he reverts to his strongest side is whether Eden Hazard is in it. That may seem a strange thing to say about a player who’s the captain and not too long ago was considered one of the best players in the world.

But he had a really poor season for Real Madrid, plagued by injuries, and the best bet might be to bring him off the bench as Portugal tire. Ironically, his brother Thorgen may play instead of him.

Portugal mixed things up a bit against France in terms of the starting line-up and looked better for it.

Out went an out-of-form William Carvalho and Bruno Fernandes, who has looked strangely pedestrian and uninspired so far in this tournament.

In came the dynamic Renato Sanches and Joao Moutinho, although the latter didn’t have a great game against the French.

The smart money is on Sanches keeping his place in the side after that impressive display and Fernandes returning to the starting eleven, meaning Moutinho misses out.

Fernandes certainly hasn’t become a bad player overnight and in what might be a tense affair, his goal scoring potential can’t be underestimated.

What’s a little strange is that Joao Felix hasn’t had much of a chance.

He seems like the obvious man to bring off the bench when things aren’t going well in attack but Fernando Santos is obviously seeing things differently. This could be the game where he finally gets his chance.

These two don’t play each other very often.

Since 2000, they’ve faced each other just five times and it’s actually Portugal who have had the upper hand. Those five matches resulted in two draws and three wins for Portugal, one of them a 4-0 drubbing in qualifying ahead of the 2008 Euros.

But none of these games were at major competitions; they were either in friendlies or qualifiers so it’s hard to know how they fare against each other under the utmost pressure. 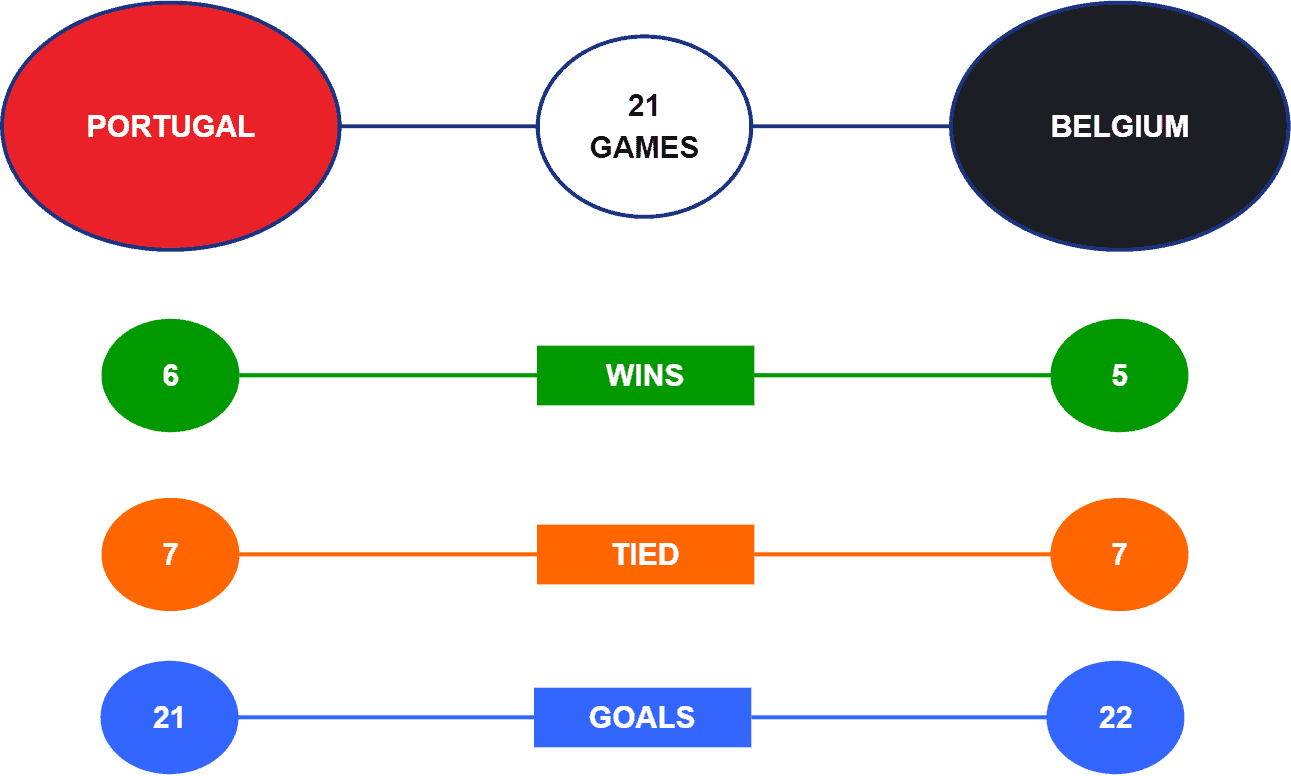 Recommended Bet: Back Portugal to qualify @ 2.1 with Betway

Belgium are favourites and to an extent, that’s fair enough. They are after all the Number 1 ranked team in the world as per FIFA’s rankings on the back of producing extremely competitive and consistent results over the last three years or so. The problem with Belgium is: they never win anything.

Of course, this is about the winner of this match rather than the whole tournament but what their lack of trophies shows is that they clearly fail to beat the best teams when it matters. And Portugal are one of the best teams.

We’ve just seen that it’s Portugal who have been better in this fixture over the years so they’ll be quietly confident about things.

These are two well-matched sides and I wouldn’t be the slightest bit surprised if this went to extra-time or penalties.

If it does, Portugal have a strong recent record in both. Last time (Euro 2016) they beat Croatia in extra-time and also knocked out Poland on penalties, where they’ve been particularly good over the last two decades in major tournaments.

Go with Portugal to get through, one way or another.

Over 0.5 penalties in the game

The general consensus is that the use of VAR increases the number of penalties that are awarded.

After all, all incidents inside the box are now checked so there are lots of cases of stray elbows or shirt pulling that have been picked up by VAR that would normally have gone unnoticed.

In three games so far that Portugal have played, they’ve been awarded three penalties for them and two against them!

Admittedly, Belgium are yet to have one either for or against them but at odds of 2.65, it’s worth betting that will change.

Recommended Bet: Back Diogo Jota to score @ 4.5 with 10CRIC

Diogo Jota has had a lively tournament so far. He scored a good goal against Germany and also provided an excellent assist to Ronaldo in that game.

Of course, it’s been Ronaldo doing the bulk of the scoring for Portugal with five goals (admittedly three of them penalties) so Jota hasn’t been getting too many of the headlines.

No problem. He’s likely to start here again and with so much attention  on Ronaldo, he may be granted more space and freedom than usual. Let’s hope so because this is a high-quality player with excellent finishing ability and one chance may well prove to be enough.

So those are your tips for the game but let’s finish things off with some cool statistics and facts before the game gets under way.

Ronaldo’s two goals against France allowed him to equal the record for most international goals ever with 109 from 178 matches. He’s scored more goals against Lithuania and Sweden (7 each) than anyone else.
Ruben Dias’ yellow against Hungary was the only booking Portugal have had in this tournament.
Ronaldo (5 goals) and Lukaku (3) are currently first and joint-second on Euro 2020’s top goalscorer list.
Eden Hazard scored just 4 goals last season, and three the season before. Proof of what a horrible time he’s had at Real Madrid.