Four-time world champions Italy will take on their Northern Alpine neighbours Austria in the Round of 16 of the European Championships 2020.

Italy are among the favourites to proceed into the quarterfinals, following their brilliant start to the Euros 2020.

As for Austria, they pulled through after a second-place finish in their group. That said, they face a big task in London to beat the mighty Azzurri – something which no side has been able to manage in the last two and a half years.

Italy will start as the favourites and our betting tips for this game against Austria will favour them.

Immobile to be anytime goalscorer
2.15
Betway 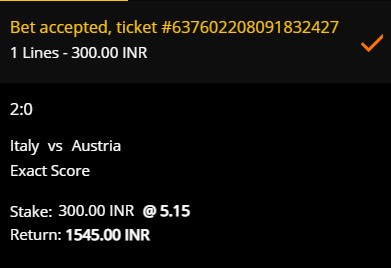 Italy finished their group stage with the perfect tally of nine points from three wins. With that 1-0 win over Wales most recently, the 1968 champions are now unbeaten in their last 30 matches.

Moreover, that last victory was their 11th one in a row – a feat that Roberto Mancini achieved after resting eight of his starting XI from the previous match. In other words, in-form players like Immobile, Insigne, Berardi, and Di Lorenzo were given plenty of rest ahead of this crucial knockout fixture.

That win over Wales are preceded by consecutive 3-0 wins over Turkey and Switzerland. With seven goals scored, zero goals conceded – Italy are heading in this match as the most defensively sound (and attacking) team in the competition right now.

However, the backbone of their defence Giorgio Chiellini remains a doubt having picked up a hamstring problem before the last group game. Bastoni filled in for the veteran defender against Wales and serves as a viable option again.

Competing in their first-ever Round of 16 match in the Euros, Austria will start this game with a significant disadvantage of facing a side that is much superior to them in every way.

Das Team qualified after beating North Macedonia and Ukraine in Group C although, they did lose to the Netherlands by 3-0. On the whole, those two wins were among the three that Austria have picked up in the eight games played in 2021.

In their last two appearances at the Euros (including hosting the same in 2008), Austria never made it past the group stage. However, Franco Foda has done well to lead his men through a successful Euro qualifying campaign and to League A in the UEFA Nations League.

Since his appointment back in 2018,  Foda has ushered in a new era of football for the Austrians but is still leaps and bounds behind the big guns like Italy.

It has been a long time since Austria tasted some glory in a big competition. Their last remarkable result in an international cup came in the 1954 World Cup when they finished third in the tournament.

The current Italy team can take pride knowing that none of their fellow teammates in the last 60 years have lost to Austria.

Their last tournament game took place in the 1998 World Cup, where Italy won 2-1. 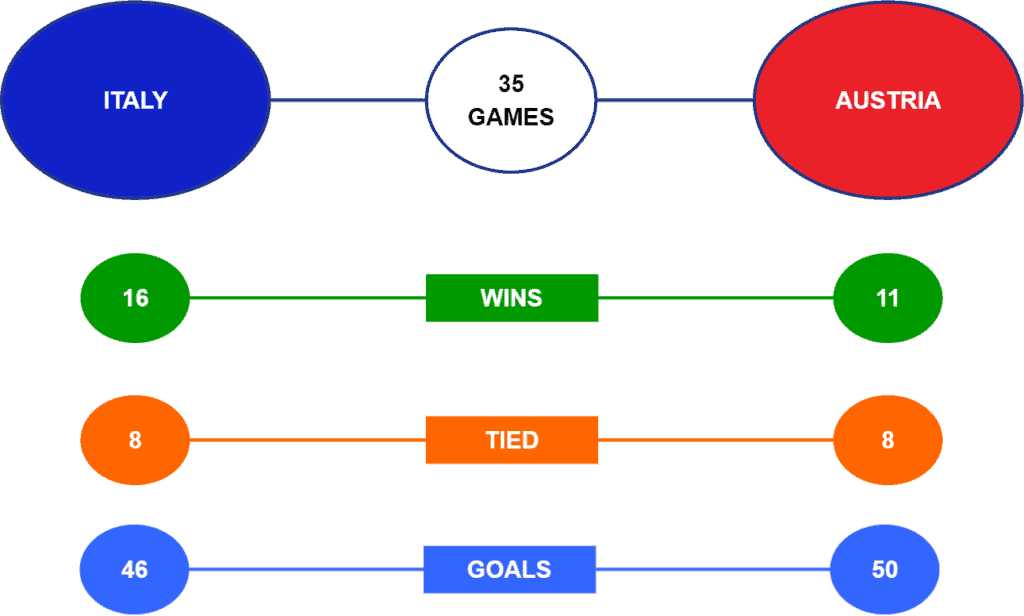 Italy have not conceded a goal in their last 11 matches
With the unbeaten streak of 30 games, Mancini has tied a national record set in the 1930s by Vittorio Pozzo
Austria have conceded eight goals in their last six matches
Italy are the first team in European Championship history to finish their group stage without conceding.

Recommended Bet: Back Italy to win @ 1.48 with Casumo

No matter how we see it, Italy are likely to emerge as the victors in this one-sided affair. Austria may have the heart and David Alaba at the helm to inspire the side but the Italians, even at a neutral venue in London, hold all the cards.

They have been largely impressive in the tournament so far, striking defensively and also in the attack. Mancini has done well to leverage the combination of experience with the vigour of youth.

Meanwhile, Austria weren’t that sensational and may have gotten through on account of a relatively easier group. But this being a knockout, they have a chance to build a lasting legacy.

Recommended Bet: Immobile to be anytime goalscorer @ 2.15 with Betway

Immobile hasn’t disappointed so far and is not likely to on Saturday evening either. With Insigne and Berardi by his side (not to mention a midfield comprising Verratti, Barella, and others), he will have plenty of opportunities to find the goal.

Under 2.5 Goals in the Match

Austria will make it as difficult as possible for the Italian strikers to find the goal. While they may not keep a clean sheet, we can expect them to keep the damage at a minimum. Italy, on the other hand, are bound to score – it is just a matter of how many goals.

Logic and past games dictate it may not be that many.