Big, big game at the Euros with a place in the final up for grabs and I’m going to give you the best football betting predictions for it. Disputing the first semi-final are Italy and Spain, who will take to the field at Wembley on Wednesday, July 7, start time 12:30 am IST.

We’re about to give you our top Italy v Spain betting tips ahead of today’s Euros match and I’ll also explain not just what I’m tipping but also why I think Italy will progress.

Knowing why you’re betting on something is just as important as betting on it and that’s what we’ll go through.

Back Italy to qualify
1.75
Betway

HOT BET! Back Lorenzo Insigne to be first goalscorer
7.5
10CRIC 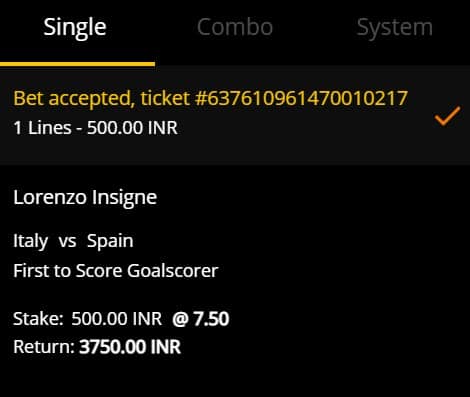 Italy’s policy of playing as a proper team rather than relying on individual brilliance, continues to pay dividends.

Last time out it was a hard-fought win in an exciting match against Belgium, one of the favourites.

They took a fine two-goal lead and though they had some nervy moments late on, they held on to rightfully book their place in the semi.

They’ve been alongside England, the most impressive team in the tournament and a lot of that is down to Robero Mancini.

He’s made them organised, compact, playing as a unit and above all: winning lots and lots of games whilst hardly conceding any goals at all.

But it’s not all completely rosy.

They’ve lost the excellent Leonardo Spinazzola to injury. His defending and forward runs were a big feature of this Italy side and they’ll have to bring in Emerson Palmieri in his place. It won’t be quite the same.

La Furia Roja have dodged a few bullets to get here but here they are.

They needed a last Group game win and they got it.

They needed to find a lot of inner strength to beat a resilient Croatia side in the Last 16 and they got that, too.

Penalties against Switzerland in the quarters? It wasn’t the prettiest of games and Spain were guilty of missing them too. But in the end they beat the Swiss, as well.

There’s a feeling this Spain side is not a vintage one.

Rather, it’s one that’s as technical and patient as usual and have had some moments where individuals like Alvaro Morata or Ferran Torres have made a difference upfront, while they’ve defended pretty well throughout.

They’ll need a big game from Moarata, who will be up against Juve defenders he knows only too well.

He’s been inconsistent so far and this is his chance to shine.

You won’t be surprised to find these two sides have played each other plenty over the decades: 33 times to be precise. It’s actually Spain who are slightly ahead, winning 12 to Italy’s 9 wins. There have also been 12 draws between them.

It’s not just historically that things have been close. As an example, the last four games between them produced a win each and two draws.

In terms of matches at big tournaments, Spain won’t have forgotten the tactical masterclass Italy gave them under Antonio Conte at Euro 2016, beating them 2-0 as underdogs.

But then again, Italy won’t have forgotten how they lost 4-0 to them in the 2012 final. 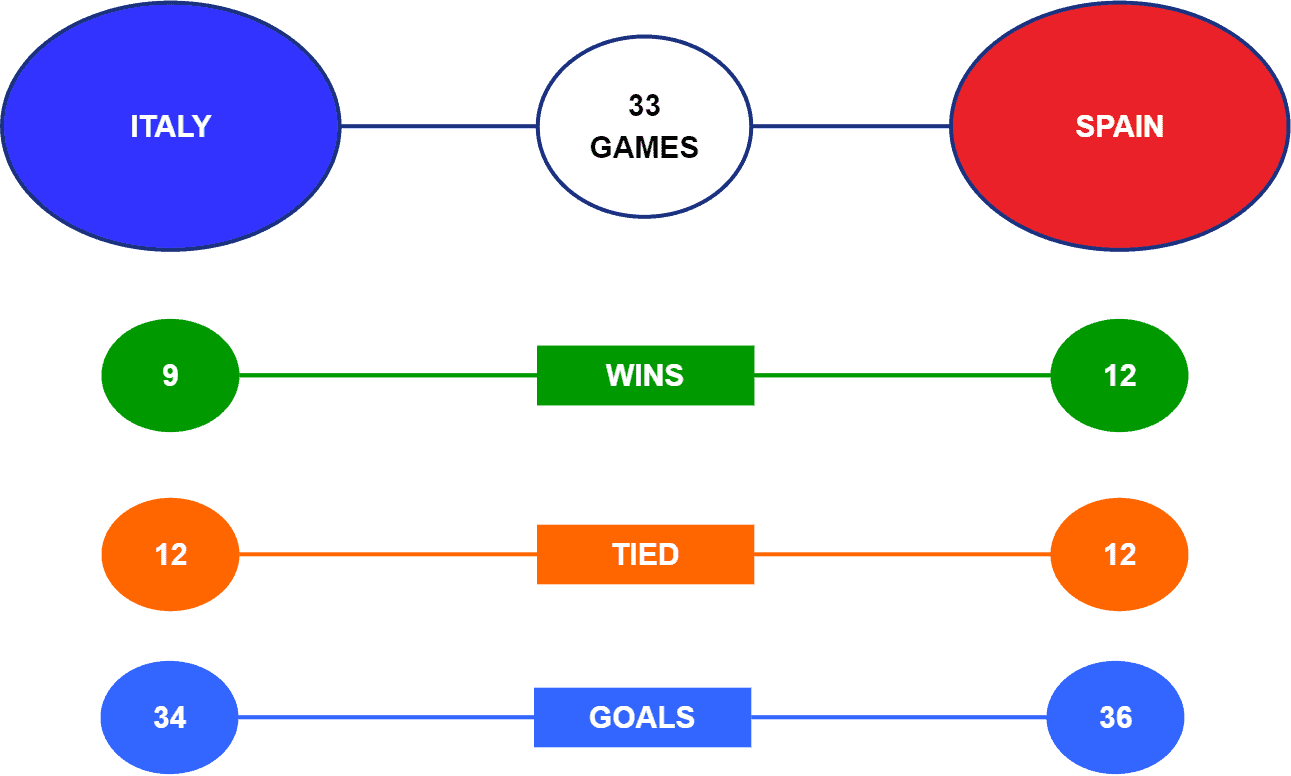 Recommended Bet: Back Italy to qualify @ 1.75 with Betway

Both teams have shown the necessary qualities to go on and win this tournament: good managers, ability to score goals, good in defence, able to close out games when ahead, strong options off the bench and good discipline during the match.

So there’s not much to choose between them and the head-to-head suggests things have been extremely close every time they’ve played.

However, Italy have been just that little bit more consistent and may also be a little bit fresher.

Last time out Spain needed extra-time and penalties to get the better of Switzerland, while Italy managed to win in 90 minutes.

That extra stamina in those legs could make all the difference here and though they could need extra time and penalties, I do fancy Italy to progress.

Italy v Spain betting odds have the Italians at 1.75 to progress and that will do me just fine.

Italy won 2-1 last time out against Belgium, the same score they’d beaten Austria by in the previous round.

Before that it was 1-0 against Wales and prior to that, two 3-0 wins in their first two Group games.

But I can’t see this being high-scoring.

Rather, I think it will be a tense-low scoring game that’s more in keeping with what’s happened when these two play each other.

Five of the last six between them stayed under 2.5 goals played across numerous competitions, the exception being a 3-0 win for Spain just under three years ago.

If it looks like it will be low on goals, it’s because that might just be the case, so bet accordingly.

Recommended Bet: Back Lorenzo Insigne to be first goalscorer @ 7.5 with 10CRIC

I’m of the view that this could be a low-scoring game decided by a single goal.

That’s precisely why I ‘ve just explained why I think this will be under 2.5 goals and why that represents a good bet.

But of course I could be wrong and even if it does stay low on goals, someone’s bound to score one!

And that someone could be Napoli’s excellent Lorenzo Insigne.

He’s played just four of their five matches so far after being rested against Wales and in those four games came up with two goals.

A return of 22 goals in 58 games all season (including the Euros) suggests he’s not as prolific as a Ronaldo or Mbappe but those are good numbers nonetheless.

In this case, it might be worth pushing the boat out a bit and going with him for first goalscorer rather than just to score.

Let’s finish things off with some cool stats and trivia about the two teams before they get under way.

Italy are unbeaten in almost three years in all competitions.
Italy have conceded just two goals in their last 13 games.
Both teams have scored in three of Spain’s five games at the Euros.
Referee Felix Brych has shown just six yellow cards in four games at the Euros, four of which were shown in Belgium v Portugal.