After the best Spain v Poland predictions? Good, you’ve come to the right place. The game will take place in Seville on Sunday, June 20, with an IST start time of 00:30 and is a crucial match at the Euros, where both are in precarious positions, Poland even more so.

Read on for everything you need to know ahead of the big game and beyond just the best Euro 2020 betting tips for Spain vs Poland.

Here are the best bets ahead of today’s Euro 2020 game. We’ll also explain why backing Spain to win to nil is the way to go on the match winner market.

Up next, top bets and the best football betting sites to place them at!

They drew their opening match against Sweden 0-0, a game they really should have won.

They had 85% possession and the vast majority of the big chances but they did also have some scary moments when Sweden’s Alexander Isak had them under pressure on the break.

But there’s no doubt that after that draw, there can’t be any more slip-ups. Another draw here would mean they’d absolutely have to beat Slovakia in their third game, while a defeat would mean they were virtually out. Even a win here still leaves them with plenty to do in their final match.

At least the exclusion of Sergio Ramos wasn’t a talking point because they didn’t concede a goal anyway.But they’re going to need a bit more inspiration in attack so there may be a change or two.

That they were beaten in their opening match shouldn’t have come as that much of a surprise.

They’ve lost five of their six first matches at major tournaments since 2000, so that loss was very much in line with their recent history.

Admittedly the sending off of Grzegorz Krychowiak had a huge impact on the game but they weren’t playing particularly well even before it happened. Manager Paulo Sousa is without Krzysztof Piatek and Arkadiusz Milik, two of his best attacking players, and it’s hard to see who he can play that can make a difference in their absence.

Their best player is obviously Robert Lewandowski but he’s a scorer of goals, not a creator of them. Ifhe doesn’t get the necessary service, they could lose and crash out here yet again.

All the other eight were won by Spain, though they haven’t actually played each other in over a decade.

That last match was a 6-0 hammering in an international friendly where some of Spain’s gretas from recent times got on the scoresheet, including David Silva, Xabi Alonso, Pedro and Fernando Torres.

One thing is for sure: if Poland are going to get anything from the game, they’re going to have to play a lot better against Spain than they have in the past. 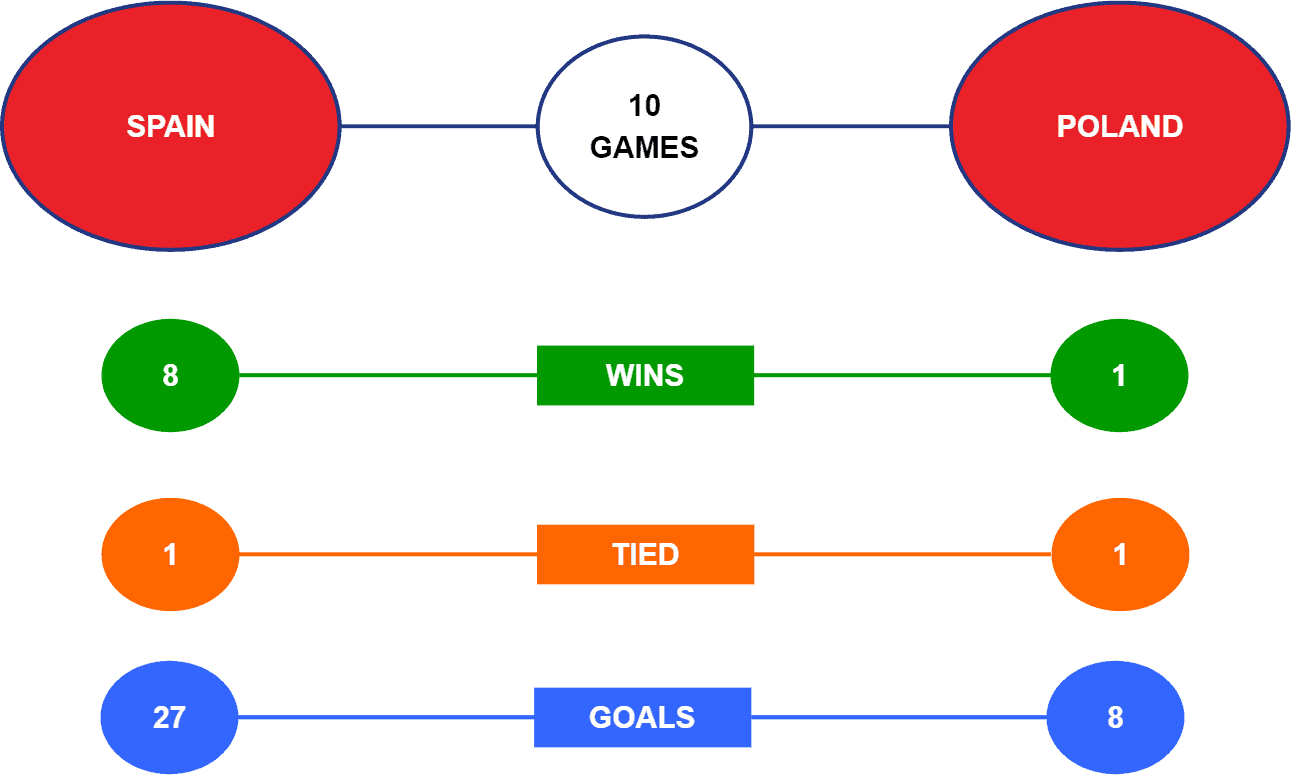 If we were to take the last two games between the two and merge them, the score would be 9-0 Spain (3-0 and 6-0).
Poland haven’t kept a clean sheet in any of their last four games.
Spain have kept clean sheets in each of their last three games.
No Spanish player was booked in that 0-0 draw with Sweden.

Recommended Bet: Back Spain  to win to nil @ 2.0 with Betway

Spain were disappointing in attack in that they failed to score a goal against Sweden but it was the usual story in defence, where they were resolute and organised, Ramos or no Ramos.

Poland look a bit lost without that pair of injured attackers and as we said already, Lewandowski can’t do it all by himself.

La Furia Roja clearly have a far better XI and options on the bench and are at home here, which could make a big difference. Since 2003 they’ve only lost one (yes, one) competitive match at home and that was a brilliant win for England in the Nations League in 2018.

Spain will just be focussing on the win and not the manner of it. Nor will they think about how many goals they need to score. This could be a tight 1-0 or 2-0 so a Spain win to nil is very much the way to go.

The ideal game plan would be for Spain to score early and then have the chance to manage their lead.

It would then be up to Poland to commit more men forward and chase the game, which would then create further chances for Spain to score on the counter themselves and wrap up the game.

And the above scenario may be exactly what we get. Spain may go for it early and may catch Poland cold so 1-0 at half-time looks worth a bet.

Recommended Bet: Back Alvaro Morata to be first goalscorer @ 4.0 with 10CRIC

The way Spain are playing at the moment, everything is focused on providing service for their main man in attack: Alvaro Morata.

Like everyone else, he didn’t have the best of games against Sweden but he had a good season at Juventus where he scored 21 goals in total, including those for his country.

His record for his country is good with a goal every other game and he should have a good chance to add to his tally here.

Given we expect it to be a low-scoring game and it’s worth going with the bigger odds on him being first goalscorer than just anytime scorer.