Russia will welcome Belgium in their opening group stage match of the European Championships 2020.

For this game, the Red Devils are all set to start as the heavy, odds-on favourite. They had a flawless campaign in the Euro qualifiers and are fielding one of the strongest squads in this year’s tournament.

Russia, on the other hand, are coming in this match on the back of mixed results in their last few games.

This Group B opening match is definitely one-sided with the odds heavily in the favour of Belgium. 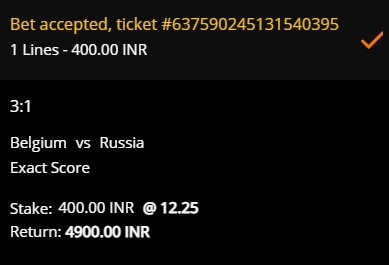 Belgium have come a long way since coming under the managership of Roberto Martinez in 2016. Having finished third in the 2018 FIFA World Cup, the Belgians are expected to have another deep run in this summer tournament.

The boys will look to better their performance from the 2016 Euros, where they were stunned by Wales in the quarterfinal. In all fairness, they have a very good chance of doing so.

Currently ranked No. 1 team in the world, Belgium had a sensational run in the Euro 2020 qualifiers. They picked up all 30 points on the back of 10 brilliant wins. Moreover, they also enjoyed a good run in the 2020-21 UEFA Nations League where they are set to play France in the semis later in the year.

Martinez’s men have lost just one match in their last 23 – a 2-1 defeat to England back in October last year. As for their build-up to the Euros, they drew Greece 1-1 and beat Croatia 1-0 in the friendlies.

That said, there are some injury concerns – Kevin de Bruyne and Eden Hazard may not be fit to start on Saturday while Axel Witsel will also be on the sidelines.

Even without this, there is plenty of experience and talent in the likes of Vertonghen, Romelu Lukaku, Dries Mertens, and others.

Three years after hosting the World Cup, Russia are back to the international stage, this time setting their sights on the Euro Cup.

They have won the tournament just once, back in the inaugural edition of the Euros when it was just a four-team tournament. In that Soviet era, Russia later reached the final thrice but had to settle for the runners-up trophy.

In recent decades, the Sbornaya had a good run in the 2008 edition where they were the semifinalists. Since then, their form has faltered heavily and needless to say, Stanislav Cherchesov will be under pressure to deliver a good run.

While they had a decent run in the qualifiers – eight wins of 10, they were later knocked out of the Nations League, including a 5-0 heavy defeat to Serbia in the final group game of that tournament.

A decent stint in the 2022 Qatar World Cup qualifiers was followed by a series of mixed results in the recent friendlies against Poland (1-1 draw) and Bulgaria (1-0 win, thanks to a late penalty).

In the likes of Aleksandr Sobolev, Aleksandr Golovin, and Artem Dzyuba, there is some attacking promise in this Russian line-up. However, for them to beat the top-ranked football team in the world is certainly a huge ask of them.

Russia are yet to register a win over Belgium in all of their past meetings. The most recently met in the qualifiers for the Euro 2020 where Belgium won both legs – home and away – with big, convincing wins. 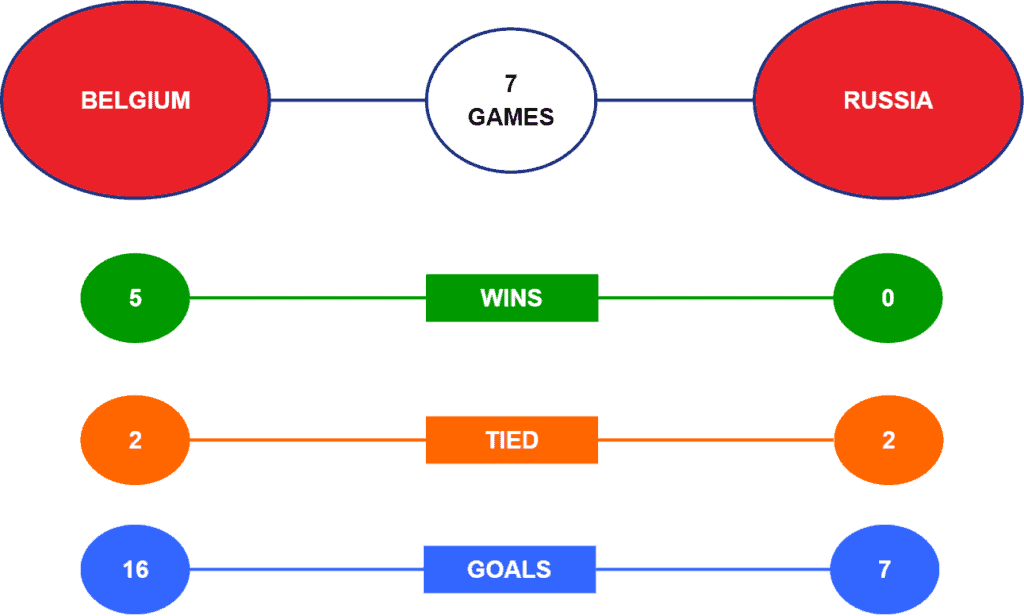 Belgium are unbeaten in their last 10 European Championship matches
They have been winning at half time and full time in all those 10 games
The last time Belgium travelled to Gazprom Arena, they beat Russia 4-1
Belgium have never won a major international title

Recommended Bet: Back Belgium to win @ 1.76 with Casumo

This fixture is more or less a no-brainer. Yes, Russia do have considerable home advantage but that should be easy to overcome for a team like Belgium. Especially considering that the Russians have not been that sharp of late.

But that is not to say they will just succumb to their opponents. Being the host side, they will put up a good, entertaining fight.

The absence of De Bruyne and Eden Hazard may hurt the team a bit but then, Thorgan Hazard, Lukaku, and others ought to be able to get the job done.

Plus, when the two sides met in the past, the Red Devils have emerged victorious with huge margins. All signs point to an inevitable win for Belgium.

Romelu Lukaku to be Anytime Goalscorer

Recommended Bet: Lukaku to be Anytime Goalscorer @ 2.30 with 10CRIC

The 28-year-old is Belgium’s leading striker. He also had a fine run in the Serie A this season, scoring an incredible 24 goals with 11 assists for Inter Milan. His contribution helped his club earn their first scudetto in over 10 seasons.

Needless to say, Lukaku is soaring high on confidence and has a very good chance of finding his name on the scoresheet on Saturday evening.

Both Teams to Score, Over 2.5 Goals

Belgium, at least on paper, look strong enough to find a few goals past Russia. The same holds good for Russia too – even though they may not be able to match Belgium’s intensity and talent, they are more than capable of preventing a goalless defeat.

Plus, when they met the last two times, the hosts did manage to score an odd goal against their European visitors.